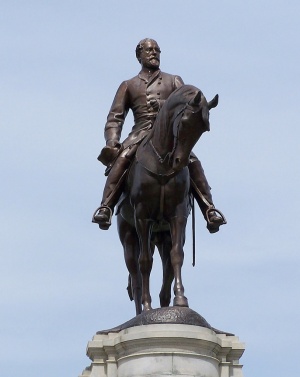 Pets participated in the Civil War in a number of ways. There were dogs who fought on the front lines, spy dogs, hospital dogs, messenger dogs and prison dogs. Other animals served as mascots for the regiments. Despite orders to the contrary, many soldiers kept pets with them, including dogs, cats, squirrels and raccoons.

General Lee supposedly kept a pet chicken in the camp so that he could have a fresh egg every day. General Lee’s horse, Traveller, was his loyal companion. He stayed with the general until Lee’s death, when he walked behind the hearse at the funeral procession. He is buried at Lee Chapel Museum, Lexington, VA.

Lt. Gen. Ulysses S. Grant had a favorite horse named Cincinnati. Col. Philip Sheridan’s horse, Rienzi, was so loved that his stuffed body was presented to the Smithsonian Institution after his death.
Gen. Stonewall Jackson’s horse was named Little Sorrel (or Old Sorrel). She outlived him and spent her post-war years touring county fairs and Confederate functions.

Dogs were commonly found at army headquarters. General Custer kept a number of dogs. Sallie, a brindle Staffordshire Bull Terrier, was the regimental mascot for the 11th Pennsylvania Volunteer Infantry. A terrier named Jack was mascot for the 102nd Pennsylvania Infantry. He was captured twice and the second time was exchanged for a Confederate soldier. A dog named Grace served as mascot for the 1st Maryland Artillery. It was killed in action and given a proper burial alongside the regiment’s fallen soldiers. The Irish Wolfhound was the mascot of the 69th New York regiment. The dogs were dressed in green coats with 69 written in gold lettering, and they marched along with the regiment.

One of the most famous mascots was an eagle called Old Abe. He was the official mascot for Co. C, 8th Regiment Wisconsin Volunteers, who named him after President Lincoln. During battle, he would fly over the fighting and screech. The Confederates made numerous attempts to kill him in order to demoralize the troops. After the war, he was put on display in a cage in the Wisconsin state capitol. A fire at the capital caused him to die of smoke inhalation. His body was stuffed and displayed until a fire destroyed the bird. A replica was made and is still on display at the state capital.

There were also some exotic pets that joined the war effort. The 3rd Louisiana CSA had a donkey, which would constantly try to sleep with the commander in his tent. The 12th Wisconsin Volunteers had a tame bear that marched with them, and the 26th Wisconsin Volunteer Infantry kept a badger. The 2nd Rhode Island had a sheep named Dick, which they eventually sold for food. The
Richmond Howitzers had gamecocks, and the 43rd Mississippi Infantry had a camel named Douglas. The camel was killed by a minie ball during the seige of Vicksburg, The 12th Wisconsin and the 104th Pennsylvania kept raccoons as unit mascots.

On losing a pet

If you’ve ever suffered the loss of a beloved pet you know the acute, all-consuming pain that accompanies that loss. Allow yourself to grieve. Express your grief, cry, scream at the world, whatever it takes. Find people in like circumstances to share your grief with. There are many pet loss groups available either online or […]

How to Behave in a Vet Office

We’ve spent many hours in veterinary waiting room and have had the opportunity to observe behaviors – 2-legged and 4-legged. We are amazed at some of the lack of courtesy displayed which can turn dangerous for some pets and people. We understand that many pets are very well trained, but a vet’s office is very […]