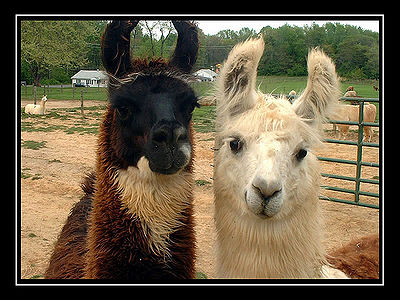 Llamas have been domesticated practically longer than any other animal in the world. More than 5,000 years ago, in the South American Andes Mountains, with their agile, padded feet, llamas were used to carry loads over difficult trails.

Four species form what is called New World Camelids – llamas, alpacas, guanacos and vicunas. Along with their cousins, the African and Asian camels, they are all thought to have a common ancestor in North America. Ancestors of both the guanaco and the vicuna made their way to South America and the Andes Mountains, adapting to the harsh environment. The llama is supposed to originate with the guanaco and the alpaca with the vicuna.

The natives, (Quehuas, mainly Incas and Amcyras) depended on these animals for all their needs including food, housing, fuel, clothing, transportation of goods. Every part of these animals was useful.

When the Spanish invaded South America in the early 1500s, they brought sheep with them, forcing the llamas and alpacas that they didn’t destroy, to escape far into the upper regions of the Andes.

Knitters know that alpaca wool is some of the finest in the world. The late 1800s brought discovery of this fact to the international textile market and alpacas became a valuable commodity, finally well cared for.

With awakening interest in their culture in the 1970s, Andean countries recognized the importance of llamas to their history. Today hunting bans protect the four species of camelids. Although still considered for food, research is ongoing into the use of llamas for their hair as well.

Adult llamas reach 5-6 feet at the poll, the top of the head between the ears. They weigh approximately 250-400 lbs. The feet are 2-toed, each with a nail and each padded. Front legs carry 65% of their weight so feet toe out slightly to maintain balance. Ears are set for maximum hearing ability. They are long and erect and can rotate backwards 90 degrees. Almond eyes are situated on each side of the head, high on the face for good vision. Their long eyelashes are a great attraction. The mouth has a cleft in the upper lip making eating vegetation easier. Coat colors can have different patterns and include white, black, shades of gray, brown, beige and reddish brown. Spotted llamas are called appaloosas just as the horse with the same name. Llamas are sheared in the spring and the wool used to produce warm clothing. The lifespan of a llama can be anywhere from about 15 – 30 years.

Llamas like to browse and eat grasses, leaves, grains and hay. They chew their cud as cows do. Fresh water should always be available. Interestingly, they process their food so well that their poop – “llama beans” – are small, round pellets, almost odor-free and without seeds. It is much sought after as fertilizer and doesn’t need processing.

Llamas are herd animals and enjoy having at least one more llama as a companion. They use caution, fight or flight depending on how they view circumstances. Llamas have very strong territorial feelings, particularly the males. They will kick and bite if challenged to protect their area. Spitting is also part of their repertoire used as a warning or actual aggression. Aggression and spitting is seldom directed at humans. They don’t like to be touched, but with patience and training will learn to trust humans enough and tolerate their touching.

Llamas make good guard animals, especially gelded males, due to their strong territorial nature. With predators smaller than mountain lions, they have no problem confronting them. Llamas usually turn to flight in a confrontation with a stubborn large predator. Of course, they have always been excellent pack animals, particularly at high altitudes. Although they can carry loads over 100 lbs. if the weight is distributed evenly in panniers (bags that hang on sides of pack saddle), they cannot be ridden unless by a child weighing under 40 lbs. Llamas can be clicker trained using grain as a reward. As with all animals, punishment does not work and should never be used.

Llamas are hardy animals but do require the same health care as their camel cousins, regular veterinary check-ups, vaccinations, any supplements recommended by the vet.

Shelters depend on climate. In areas with cold winters a barn is necessary. In warmer climates, a 3-sided, roofed structure or an open roofed area will do as long as they can shelter out of the sun and wind. They need a very large fenced-in area to browse.

Llamas are very intelligent animals. Socialized well, they are calm and gentle, making them good pets. Llamas are being used as therapy animals which attests to their great personalities.

The Fennec Fox is a small canine, also known as the desert fox. Before considering this fox as a pet, you must check with local authorities to make sure it’s legal to own this type of pet where you live. Fennec Foxes can be tame if they are hand-raised. With the proper socialization, they can […]