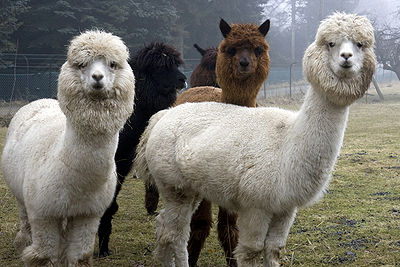 Alpacas are one of the 4 species of camelid, sharing their history with the Llama, vicuna and guanaco. Settling in the harsh environment of the Andes Mountains of South America, alpacas were domesticated more than 5,000 years ago by the Incas, natives of the area. Alpacas were first imported to the U.S. from Peru in 1983.

Alpacas are treasured for their incredible fleece, once worn only by people of high birth. The fleece is soft, strong, durable, light-weight but warm, hypoallergenic and flame resistant. There are two types of alpaca, the Suri with long silky dreadlocks and the Huacaya whose fleece is wooly, dense and crimped. Alpacas and Llamas bred together create the Huarizo which has longer fleece. Alpaca fleece has 22 natural shades including black, silver, rose gray, white, dark brown to champagne and all shades inbetween these colors. They are sheared yearly in the spring.

Adult male alpacas are called anachos, females are hembros, babies are crias and weaned crias are called tuis. Adult alpacas weigh anywhere from 125-200 lbs. They are 34-36 inches tall at the shoulders. Alpacas have long, slender necks, long ears, thick lips and large expressive eyes. They are also environmentally friendly. Their feet are two-toed, with toenails and their soft pads don’t cause damage. They also nibble only the tops of grasses. As herd animals, it’s a good idea to keep at least 2 alpacas for the companionship they give to each other. For people who don’t have land to keep alpacas, they can be boarded and are called agisted alpacas.

Alpacas eat a variety of grasses, weeds, hay and grain. With their 3-chambered stomachs, they chew their cud and are able to absorb most nutrients.

Alpacas are hygienic animals. All of them use the same area to poop and urinate. This keeps the spread of parasites down and their grazing area clean. They should have shelter from strong winds, sun and inclement weather and predators if necessary.

Alpacas are intelligent animals, curious, friendly and gentle. They are good with children and easily trained. Children can be taught how to lead them with a halter. They are not pack animals and should not be ridden. They do not like to be touched on the head, but with early socialization and training, will tolerate being petted. Because of their gentleness towards humans, they are being used as therapy animals.

Alpacas can spit, usually at each other or predators, rarely at humans. They communicate by humming and other sounds as well as tail and ear movement and body posture. Fencing is used mainly to keep predators out as alpacas will not challenge it. A strand of barbed wire at the outside bottom of the fence will discourage predators from digging under. Alpacas are capable of fighting off small predators. But often, a llama is used to help guard them.

Where do Skunks come from? Striped Skunks are native to the Americas. The Skunk is a mammal and belongs to the family Mephitidae and the order Carnivora. Captive-bred skunks weigh from 7-10 lbs. They are about the size of a pet cat. Life Span is approximately 10 years. They come in a variety of colors. […]

Stick insects are one of the most popular insects kept as pets. They can hide in plain sight on the branches of the plants they eat since they are camouflaged. There are almost 3,000 species of stick insects and the easiest to care for are the Indian, or laboratory, stick insects. The Australian spiny leaf […]