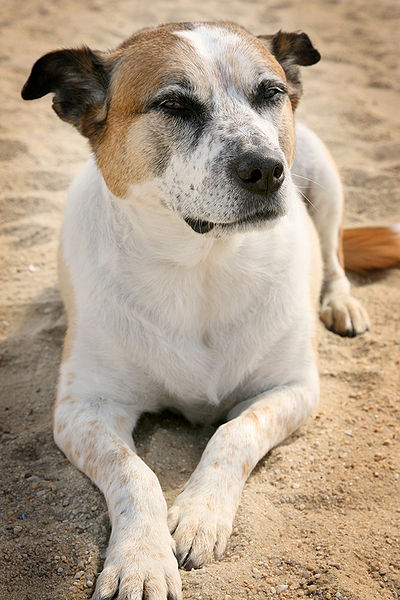 Dana died at 9.00am on Sunday 31st May. As we still had her shelter sister Scully, we were worried about her pining, so we got another rescue dog on June 10th, Ivy.

Two weeks later, I was lying in bed on a Sunday morning, half asleep and I got a blinding yellow flash across my eyes and I sat up and looked at the clock and it was exactly the time Dana died. Then I turned and saw that Ivy was lying next to me in Dana’s old spot, and she was rubbing her eyes with her paws, exactly like Dana did every morning when she woke up. I used to rub Dana’s eyes and then say ‘Now you do it!’ and she would rub her own eyes.

A week later I was standing at my dressing table and I was looking in my mirror, getting ready for work. I felt a dog nose nudge my leg and I looked down expecting to see Scully or Ivy there. Well, they were both outside lying on the back porch! I know it was Dana, it was at just the right height for her nose and it was a hard push on my leg, like she used to do when she wanted my attention.

I work a lot of late shifts and get home about 11.30pm and Dana was always so excited to see me that she would be at the front door barking and whining and I would tell her to keep it down as my husband would be sleeping. Scully was always at the door too, but never made a sound and would just have a toy in her mouth to greet me. About a month before her dx, Dana was barking and carrying on when I got home one night and I remember thinking, I’m not going to tell her to be quiet anymore, as one day will come when I long to hear her barking and she wont be here. Maybe I had a moment of intuition that something was up?? Who knows why I suddenly thought that then. Anyway, about 6 weeks after she was gone, I got home and went to put my keys in the door and I heard whining. I was really surprised as Scully never makes a noise and Ivy had never made a sound either. I opened the door and the two dogs were actually still on my bed, all sleepy and hadn’t even come to the door!! It was Dana! This happened again on another night too, not long afterwards.

My stonemason friend made me a granite memorial plaque for Dana, that I was going to place under a gum tree in memory of Dana, at a friends animal sanctuary. In mid August, on the morning of the day that I was driving out to the sanctuary to place the plaque, I was walking Scully and Ivy down at the coastal park we live near. I was walking along asking Dana if she was okay with us having Ivy and did she think Scully liked her. Just at that point, Ivy ran across some low ground cover and ran up to me with her back foot half sliced off!! Anyway, Ivy had to go in for emergency surgery on the foot and she couldn’t come for the drive out to the sanctuary to place the plaque with me and Scully. I think Dana answered my question! She wasn’t happy at our decision at that time and didn’t want Ivy going up to place the plaque with us. Of course later on, after the animal communicator had connected with her, Dana had accepted Ivy and even said she was okay for me to take Ivy to our ‘secret place’ for a walk. I still haven’t though, I just can’t do it.

About 2 weeks after this, I was in bed reading and Scully was lying on the end of the bed, which is her spot. I told Ivy to get up onto her spot next to me, she’s usually up there before I even get into bed. Well Ivy lay down on the floor just looking at her spot on the bed, but nothing I did could entice her up on the bed. So I said to Scully, you come up here and sleep next to me then. Scully looked at me horrified like ‘Can’t you see that spot is already taken?’ and neither of them would come up next to me, Ivy slept on the floor, Scully at the end of my bed. Well, the communicator told me that Dana had been back on my bed a couple of times and I think this was one of them!!

One day in late September, I was having a terribly sad day, missing Dana so much, and the postman delivered a small parcel that was an oil painting of Dana that an artist friend of mine had done for me. Well, I opened it and completely lost it, I was sobbing. Then I had to drive to work and I was talking to Dana all the way telling her how much I missed her. As I was stopped at the traffic lights, I was compelled to look up at the clouds. The clouds were all spread out and fluffy except for this one cloud that looked really solid and almost like it had an outline. I stared at it and realised it was in the shape of a dog rolling on her back. I could make out a dog lying upside down, legs in the air, ears, face, nose everything! It was amazing. I was completely awestruck. It didn’t just look a bit like a cloud shaped like an upside down dog, it was in the distinct shape of Dana rolling on her back with her legs in the air!!

I could see her head and funny shaped ears really clearly. I watched it until it went behind a building and then when I drove off and looked at the other side of the building, it had completely disappeared. Rolling on her back was one of Dana’s favourite things to do, she would throw herself down at any opportunity to show off and roll about! The next day, as I was walking the dogs around the coastal park, I was talking to Dana about the sign from the day before, and as if to prove that it had really happened, I looked up at the clouds and there was a cloud in the distinct shape of just her head, with her eye and exactly the shape of her ears and nose. She was telling me to BELIEVE it was her, and I sure do believe it. I know in my heart that she was showing me these things to comfort me. That is why I am so sure that Grimace is already sending you signs, through your mum, who also loved him so much.

I have also seen flashes of white at night through the glass door that seperates our lounge from our kitchen, as though she was walking past. Another thing that happened, is that where I work, it’s really hard to get a park on the street and our work carpark is so expensive, and one day I was talking to Dana saying ‘find me a good park Daynee girl’ and the best park appeared straight away!! And I’ve always found a park on the street since that day, I’ve never had to go in the carpark since that day! And that was months ago. I mean, it may be a co incidence, but I like to think not, I think she is looking out for me.

I Am Your Dog

This was sent to me by a dear friend on the group, bonecancerdogs. It has so much meaning for all pet lovers and I wanted to share it with you. I AM YOUR DOG (author unknown) I am your dog, and I have a little something I’d like to whisper in your ear. I know […]

Rock died on a Friday – the day after Thanksgiving. My husband, who works nights, was off until Monday night. I knew it was going to be a rough night with him at work and Rock gone. Rock had always slept with me, and I always felt safe and secure even though my husband was […]