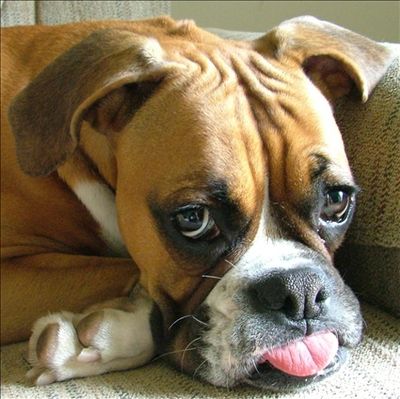 Today when hubby came home he said he wanted to tell me something. He was at a fast food restaurant for lunch. He said that while he was inside ordering he heard a dog bark. He thought his mind was playing tricks on him since he was inside and dogs are not allowed. At first he thought perhaps it was a service dog but looked around and didn’t see any PLUS they rarely make noise while working. He thinks maybe he was hearing things but then heard it again. This time he realized that he was hearing a dog through the speakers coming from the drive thru. He said that the bark was very familiar. He looks over towards the drive thru and sees a BOXER in all her glory wiggling her whole body just as happy as could be. See looked thru the window directly at him with a big smile on her face and he said she was wearing a collar close in color to Cami’s. He said he got teared up but smiled at the same time. I told him that I was happy that he got a sign even though I was jealous that I still had not got mine. I was sad for me but elated for him. I know it made him feel good.

Tonight I have a bedtime potty visit for a client (own a pet sitting company). I take the girl out for a walk. She does her business. While out I realize that tomorrow is trash day and client didn’t ask me to take out the trash. Thinking since they will be home early tomorrow they will more than likely be able to get it out then. So I head back inside with the Cocker and she is sticking her face in her empty food bowl. I know she is on a bit of a diet however…..I can’t have her going hungry overnight PLUS with the weather we have been having think just in case parents are delayed I will give her a splash of food.

I grab both bowls and wash them and add some food to one and water to the other. We play for a bit, I give her a few treats, write my note to the clients and start turning off lights. The trash thing comes back into my mind and I figure….What the hell. I’ll do it for them so it is one less thing they need to think about when they get home. 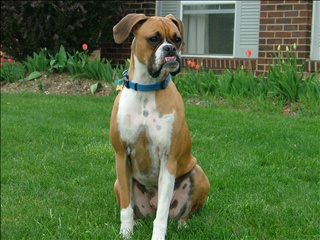 I head out to the garage and grab the trash can. Decide to open up the recycle bin to see if it needs taken to the curb as well. Open the garage and start getting them down the driveway. Get them to the curb and due to the large piles of snow I don’t have much room to place both containers on the driveway and still be able to get out. I place the recycle bin on top of a huge snow pile.

I turn to head back up the drive and see the shadow of a man and a HUGE dog walking in my direction about 2 houses away (very dark outside). I am almost at the garage and hear a screeching noise. Turn to see what it was and the recycle bin is sliding off the snow pile. Head back out to reposition it.

As soon as I turn around and face the house the man and his BOXER are right in front of me. I almost fell to my knees. I actually think I did fall to my knees but in a controlled state. I ask if I could pet his Boxer and then I don’t know what happened to my composure but I tell this total stranger that I lost my Boxer just days ago and I have been looking for a sign from her.

THIS WAS MY SIGN. In order for this meet-up to have happened SO many things had to be aligned. I am in this same neighbourhood on the exact street every single day through the week. I have never seen this dog before and I know where ALL the Boxers live!

He was very gracious and introduced me to “Baxter”. He was the largest Boxer I have ever seen. Hence me not giving them a 2nd thought when I saw them walking from a distance. I *think* I thought he might have been a Lab now that I think back. He was a reverse brindle as well and since he was so dark and TALL and it was so dark outside I might have been thinking black or chocolate lab.

He is apologizing for Baxter’s lack of manners. He was just a wiggling kidney bean foolish Boxer and I LOVED IT.

I got a Boxer kiss. I choose to believe the kiss was sent from HEAVEN.

Who always did things on her own timeline!!!

Thank you baby for FINALLY letting mommy know you are OK.

This morning was pretty bad. I have little work coming in and find the days so long without her (Tina). I have been calling about a new puppy and have gotten a bit of a run-around with some of the breeders: they either don’t have pups or don’t have little girls. I was putting Tina’s […]

I know my girl sent me a sign today. I was out shoveling snow (1 1/2 of the 8-12 inches we’re getting) so my husband could get into the driveway when he gets home and I looked down and saw something that looked sorta like a spring. I kinda blew it off for a second […]