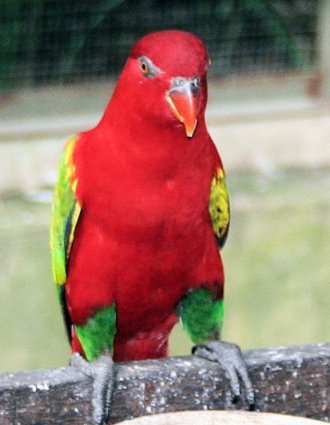 Where does the Chattering Lory come from?

The Chattering Lory’s home is Indonesia. This bird may be one of an endangered species and may not be imported into the U.S. check with CITES for current information.

The Lory’s body is scarlet with yellow under the wings and on the shoulders. Thighs and wings are green. The beak is orange. The Lory looks like a miniature parrot which it is, Lorikeets being the smaller of the two.

What is the personality of the Chattering Lory?

The Lory is an affectionate bird and bonds closely with its owner. It is very playful and loves attention. The Lory can be aggressive with other birds and may even kill them, so it’s best in a cage alone. As the name implies, this can be a noisy bird.

How do I care for and feed the Chattering Lory?

The Lory thrives on a diet of nectar. Ask your pet food supplier for Lory food. You can supplement the diet with cooked foods such as fruits, vegetables, hard boiled egg and greens. Vitamins may be added to the water. A bird bath with water changed daily can be placed in the cage. As the lory is very playful, toys should be provided in the cage to prevent boredom. Fresh food and water should be given daily.

The European magpie, also known as Pica pica, belongs to the crow family, and is widespread throughout Europe and Asia. Magpies are easily recognizable by their distinct glossy black plumage, white belly and shoulders, and its long black tail that could reach half of its total body length. Experts believe this bird to be one […]

The natural habitats of the Eclectus Parrot are the tropical rainforests of the Solomon Islands, New Guinea and Northeast Australia. Parrots are generally tree dwellers, digging a hole in the trunk for nesting. The Eclectus Parrot females range from 383-549 grams; males are 388-524 grams. Length is 12-14 1/2 inches. Lifespan is about 50 years. […]