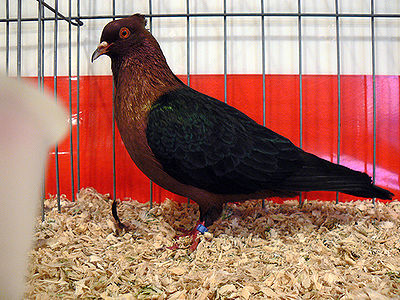 Pigeons have been domesticated for over 4,000 years. Homing pigeons were first domesticated in what is now Southern Iraq. The first recorded history of pigeons used as carriers came from Egypt. Pigeons are loyal and affectionate and make good companions. Common pigeons we see in the city are actually European Rock Doves. These birds are the ones symbolizing love and peace and are the ones Noah released after the Great Flood.

Since they eat garbage, they clear away some unwanted litter. Unlike the common belief, they rarely spread disease to humans.

For thousands of years pigeons have been used as messengers. Today they give valuable messenger service and even deliver medications to people in remote areas. Pigeons are fast flyers and have the uncanny knack of returning to their homes.

Messages were written on light, thin paper and placed in a small tube attached to the bird’s leg. This was known as “pigeon post.” Besides being trained to carry messages, during World Wars I and II, cameras were hung on their necks and the pigeons acted as spies for the allies.

In “Project Sea Hunt” the navy trained pigeons for search and rescue missions. With their excellent eyesight, they were trained to see red or yellow life jackets. They were carried by helicopter and would peck a keyboard notifying the pilot that a survivor was spotted.

Today homing pigeons are raised mainly for racing. They can fly as fast as 60-80 miles per hour and go 80-600 miles in a day.

I remember as a child, we had a neighbor who had a flock of pigeons as pets. He trained the birds to fly in unison by pointing a stick in the direction he wanted them to go. It was amazing to watch and of course, the pigeons always came home.

Brahmas came to the United States from Asia in 1846. They reached England in 1853 when Queen Victoria was presented with a quill pen made from a Brahma feather. Brahmas were then known for their excellent laying characteristics, but breeding for color has reduced these abilities. Brahmas come in light, dark, buff and partridge. They […]