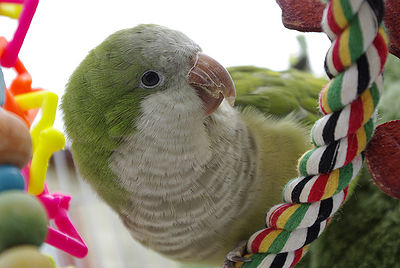 While the Quaker Parrot (also known as the Monk Parrot) is a South American bird, there are large colonies in South Florida, the Midwest and the Northeast United States. Quaker Parrots bob their heads and shake, normal behavior for them and the reason for their name.

Adult birds are about 12 inches long. Colors are grey face, neck and chest, but they are primarily green. There are color mutations such as blue, yellow and cinnamon which are highly prized and very expensive. Lifespan in captivity is about 15-20 years.

Most parrots live in holes in trees, but the Quaker builds stick nests and live in colonies.

Quakers are very affectionate birds and usually get along with everyone. When raised in captivity, they can learn to talk and can have a large vocabulary. They are among the best at talking in the world. But they can be noisy like most of the parrot family.

The Quaker’s cage should measure at least 18x18x18 with bars set close enough so that their heads won’t get caught between them. These intelligent birds are always ready for mischief and have learned to open their cages, so doors must be secure to prevent them from getting out on their own. Puzzle toys placed in the cage should keep them interested and busy.

A high quality commercial bird food should make up part of the Quaker’s diet. You can add fresh, organically grown fruits and veggies. If you are unable to find organic produce, wash the fruits and veggies very well to remove any pesticide residue. Reserve seeds and nuts for treats as they have a high fat content. Always have fresh water available.

Be sure to check if owning a Quaker Parrot is legal where you live.

Lorikeets are very colorful, playful birds. There are a number of varieties, but not all are kept as pets. They are sometimes called honeyeaters as their favorite food is nectar. Lorikeets can be found in the East Indies area and western Pacific including 7 species in Australia. Most lorikeets are green with red and yellow […]