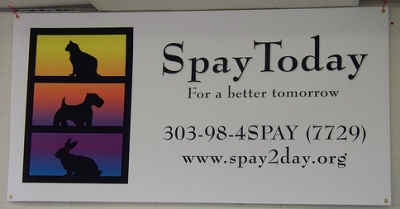 Female cats and dogs can reproduce as early as 6 months old. The heat cycles are up to 4 times a year for cats and twice a year for dogs. Males reach “puberty” from 6-9 months old.

Males that have not been neutered can demonstrate behavioral problems such as becoming territorial and aggressive. Female cats can become very noisy and leave drops of blood around the house.

Spaying and neutering are safe, commonly performed surgeries. The female spay surgery is known as ovariohysterectomy where the ovaries, uterus, oviducts and cervix are removed. In Europe the surgery is performed removing only the ovaries. Two or three small incisions are made at the area of the ovaries and with a special instrument, the ovaries are removed. The uterus eventually shrivels up and causes no problems. This can also be performed laparoscopically but due to the cost of equipment, fees are necessarily higher. These two procedures are less invasive and cause less trauma. Laparoscopic Ovariectomy as it is called is performed in the United States as well. You can check online for a hospital using this procedure near you.

The neutering surgery for males involves removing the testicles, epididymus and spermatic cord. The surgery is called orchidectomy or castration.

While these surgeries can be performed as early as 8 weeks of age, they can be done safely at any age taking the animal’s health into consideration. Spaying and neutering can take anywhere from 20 minutes to an hour. During the procedure the cat or dog is completely anesthetized. Recovery time is very quick. Sometimes you can take your pet home the same day. Depending on the type of stitches used – some dissolve over a short period of time – they are removed 7-10 days later.

The benefits of early spaying and neutering can help prevent problems like aggression, dominance, territory marking, instinct to roam before they take hold. Female cats and dogs that are not spayed early run a much higher risk of uterine, ovarian and mammary cancer as well as inflammation of the uterus which is a life-threatening disease called pyometra. Males that are not neutered have a much higher risk of testicular cancer and prostate problems.

The benefits of spaying and neutering are giving your pet a longer, healthier life. And you’ll be faced with lower and fewer veterinary bills.

See more: The Importance of Spaying or Neutering Your Pet

Spay or neuter your pet. It’s the right thing to do.

Veterinary News DVM 360 reports that according to a study at the Gerald P. Murphy Cancer Foundation in Indiana, retaining the ovaries in female dogs for at least 6 years increases survival advantages and longevity. The study was conducted on female rottweilers. The debate is on whether to remove the ovaries when hysterectomies are performed in dogs. Similar studies in women showed increased mortality from causes other than ovarian, uterine and breast cancer when ovaries were removed before 50 years of age.

DVM also reports that in Ohio there is a group attempting to introduce a law making animal sterilization mandatory statewide. At present, California is the only state to enact a law (the Davis Law) mandating that shelter and animal rescues spay or neuter animals before releasing them for adoption.

There have been recent studies done on early spay/neuter that may impact significantly on this practice.

A study conducted in 1998-99 with Golden Retrievers found that dogs spayed/neutered at less than a year old were siginificantly taller than those spayed/neutered at more than a year old. Studies show that early spay/neuter and the increase in bone growth may possibly contribute to CCL rupture and hip dysplasia. Studies also link certain cancers (ie: hemangiosarcoma, bone cancer) with early spay/neuter. Early spay/neuter were reported to increase fearful behavior (females), aggression (males) and other phobias and undesirable sexual behaviors.

While there is debate on whether early sterilization affects the health of the animal, the alternative is continued euthanization of unwanted pets.

Non-surgical techniques in the form of drops, tablets or injections are available, but there have been unwanted side effects from long-term use of some agents. Research is ongoing to find safe non-surgical methods for sterilizing pets.

Total Recall: What It Means When a Pet Food Gets Recalled

You’ve undoubtedly heard about the round after round of recalls that many pet foods experienced back in 2007. What does it mean when a pet product has a recall? Can the company be trusted again? First, let’s look at it from the viewpoint of the consumer, the person who buys the food. From what I’ve […]

The Effects of Volcanoes on Pet Health

The volcano in Iceland put many animals at risk. Animals who inhale or ingest volcanic ash are at risk for fluoride poisoning. This could cause internal bleeding, long-term bone damage and teeth loss. This was a large concern for farmers of sheep, cattle and horses in southern Iceland. Some horses panicked and ran away. They […]

Called LAACS (long-acting anticoagulants), they are in use today in many rodenticides. The pellets are dyed green and while humans can recognize them for what they are, to cats and dogs who have limited color vision, they look like pet food. LAACS work by blocking the body’s use of Vitamin K which is needed to […]