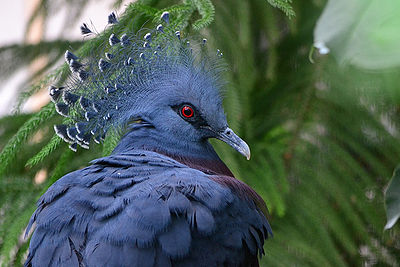 This unusual pigeon is not the same as those we are used to seeing.

Named for Queen Victoria of Great Britain, the pigeon’s coloring is blue with a maroon chest. They are tall, about 29 inches (74 cm.)and the largest living pigeon. They have a magnificent fan-shaped crest of feathers on the head, looking like a crown.

These beautiful birds are omnivores. They generally forage on the ground searching for and eating fruit, seeds and snails. They can fly, but prefer ground living. Lifespan is about 25 years in captivity.

The pigeon’s native habitat is the rain forests of Indonesia and Papua New Guinea. They make an unusual sound somewhat like blowing over the top of a bottle.

Victoria Crowns are monogamous and mate for life. They produce one to three large white eggs yearly which are in the care of both parents. After 28 days the chick emerges and its parents continue to care for it for several weeks.

This pigeon is intelligent and friendly, easily tamed as it is not fearful of humans and will tolerate other birds. As pets, this rare bird needs a very large space preferably its own room to be able to walk around. Their rarity makes them very expensive if one can be found. There are not many breeders.

Sadly, the Victoria Crowned Pigeon is hunted for its meat as well as its beautiful crest. It is on the endangered bird list.

Vital Statistics: Place of Origin: Egypt Coat Type: medium long, fine, silky Color: silver, bronze or smoke, all with spots & stripes even in skin pigment Temperament: intelligent, athletic, loyal, curious, does not get along with other cats or pets Where does the Egyptian Mau come from? Cats were worshiped and protected in ancient Egypt, […]