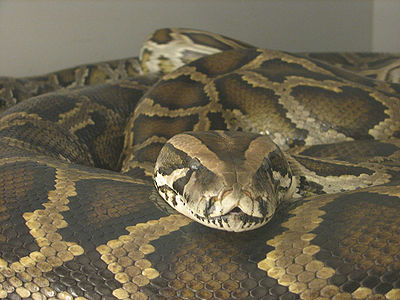 Biologist John Humphrey has developed a python trap that has been patented.

The trap is being tested in Florida’s Everglades where non-native Burmese pythons are wreaking havoc with wildlife. When the snakes became too much for owners to handle, they have irresponsibly released them in wild areas. Burmese pythons are not native to America.

The trap is a cage made of steel with a net on the end to trap the snake. It is a live trap so the snakes will not be harmed.

Hopefully this trap will work and rid the Everglades and any other area where necessary of this invasive predator.

August 2012 Maryland’s Court of Appeals ruled that “pit bull” dogs are “inherently dangerous.” This makes the state of Maryland’s policy toward dogs the most unfriendly in the United States. In essence, the ruling states that if a pet bull dog injures someone, not only is the dog owner liable, but so is the owner […]

2014 The International Union for Conservation of Nature (IUCN) along with all the people of this world have lost the battle to save the Western Black Rhino. This magnificent creature has been declared extinct by the IUCN. While the IUCN listed the Western Black Rhino as extinct in 2011, their policy is to wait 5 […]