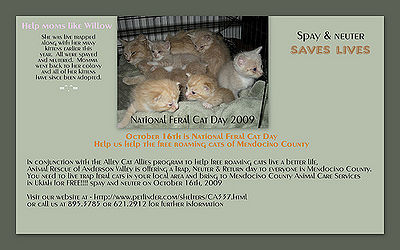 The program of capturing and euthanizing strays doesn’t work as it does not prevent over-population. New cats and dogs take the place of those captured.

Since feral cats and dogs too are usually unsocialized, it’s impossible to put them up for adoption. Most shelters don’t have the time or the money to invest in socializing these animals.

Unspayed cats can produce 3200 kittens over a 12 year period. By spaying and neutering, the number of strays is reduced and euthanasia will no longer be necessary.

There is a positive program in effect in several communities in the United States. The program entails trapping, neutering and releasing cats back into the environment where they were found. In this way, the reproduction cycle is stopped and over-population is prevented. Humane traps are used to capture the strays. While under anesthesia for the spay/neuter, the tip of the left ear is cut off, proof that this cat no longer contributes to over-population.

A surprising number of people feed feral, stray and abandoned cats, leaving food outdoors for them. In some areas vouchers are issued for these people to take the cats to a shelter to be neutered. This method has proven to cost taxpayers less. And shelters, since they don’t need to provide for so many strays, save money as well.

Feral cats are actually the result of owners abandoning kittens their cats have produced. If owners spay and neuter their cats, this problem wouldn’t exist.

I urge you to contact the ASPCA, the Humane Society and shelters in your area to encourage them to set up a program of Trap, Neuter, Release. It’s the humane way to deal with this problem.

Caring for an Older Cat

Perhaps we can take a lesson from older cats. They are quieter, love attention and are great companions. They take the time to “smell the roses” and leave their younger counterparts to their antics. When you notice these signs of aging in your cat, it’s probably time for a visit to your vet. Your vet […]

Dogs are well known for their therapy skills. But cats have the same bond with humans and are being recognized as having a strong role as therapy pets. You can tell by yourself how, when petting your cat, tension leaves your body, you feel more relaxed. The feel of soft fur under your hands supplies […]

Some of us have cats that long for the great outdoors. But there are dangers out there for our kitties. One solution is to walk your cat, much as you would a dog. Here’s how. First be sure your cat is current on all vaccinations before going outdoors – you don’t want to pick up […]