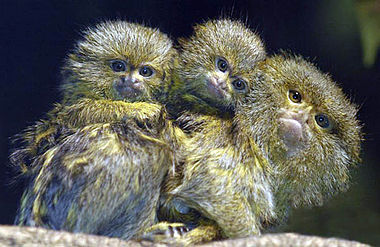 Being a father is tough!

You have to find a way to feed your offspring, protect them from predators and, along the way, teach them a lesson or two about life! So, Let’s take a moment to honor and thank all the fathers out there, on this FATHER’s DAY, who have dedicated their time and energy to being great dads! This goes for animal dads too!

In fact, being a good animal dad is pretty rare in nature! Why? Because most males across the animal kingdom ditch their female counterparts in order to pursue more opportunities to reproduce. From a biological point of view, producing offspring costs very little to males yet guarantees big returns – a continuation of their genes. For this reason, most male species will typically seek multiple mating partners while leaving single moms to fend for themselves.

But not all males are ‘deadbeat dads.’ Some of them are so dedicated and selfless, they earned a spot on our list of the top 10 coolest animal dads!

And here they are: 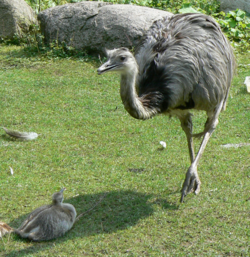 While males are usually the gender with commitment issues, the opposite is true when it comes to the Rhea. It’s the females of this species that approach the males, batting their long eyelashes and mating with as many guys as she can get her ‘webbed feet’ on (polyandry)! When it’s time to lay her eggs she finds a beautiful nest – that was built by a male Rhea – and deposits her eggs inside. Here’s the crazy part: because so many females lay their eggs in the same nest (up to 50 eggs), the male Rhea ends up incubating and caring for eggs that do not actually belong to him, sort of like a foster dad! For 6 weeks, Rhea dads aggressively guard their eggs, charging at any animal that approaches them. As the chicks grow to become young birdlings, their dad keeps them safe by rapidly clacking his bill with warning calls, ‘Don’t wander too far away!’ What a fine-feathered father!

Most dads would freak out at the thought of having twins but not papa Marmosets! As a general rule, almost all Marmoset births result in twins. As you can very well imagine, giving birth to twins is not easy, especially for the marmoset moms, who lose a whopping 25% of their body weight during the process! Being weak and fragile, the mother needs time to recuperate. This is when dad swoops in and saves the day! The twins cling to hairs on his body and hang on for a ride. Their father will carry, feed, groom, play with, and protect them while mom rests. Way to go Primate Pop! 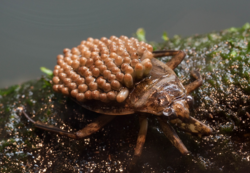 Insects have a bad reputation when it comes to child welfare. Most arthropod males and females usually neglect their eggs after they’ve been ‘deposited.’ But, that is far from the truth when it comes to waterbugs. After a life-threatening and ferocious mating session for the male, the females proceeds to glue up to 150 fertilized eggs onto the males’ back (and wings) with a natural ‘cement’. Over the next 3 weeks, the eggs will grow, adding an immense weight for the fathers to carry. Every so often you will catch the waterbug dad cleaning the eggs (preventing the growth of fungus) and bending his knees, which serves to aerate the eggs with a fresh flow of oxygen. Don’t mess with this invested insect, if you come too close he will deliver a nasty bite, and although not poisonous, a waterbug bite is considered one of the most painful bites known to man! 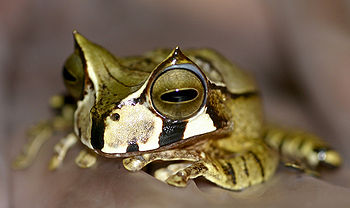 Kermit has nothing on this frog. Not only is the mimic poison frog a loyal father, he is a loyal husband as well- in fact, the only known species of frog to be monogamous. When his ‘wife’ lays her eggs on a leaf, the father watches for signs of hatching. Those eggs that do hatch are moved to a pool of water inside a bromeliad. Once inside the bromeliad the amphibious father guards the tadpoles until he sees signs that they are ready to feed. He then lets out a croak, alerting the female that his tad-children are hungry. The mother comes by and lays an unfertilized egg in the pool of water as a source of nourishment, and the father stays by the pool protecting his offspring like a British guardsman!

Can you believe it? Not one, but two different types of frogs made it on the list of top animal dads! I introduce you to the Marsupial frog. Although the Marsupial frog is not a true marsupial, it has some ‘kangaroo-like’ tendencies- the frog father carries his offspring around in a small ‘pocket’ called a brood pouch. Why? When the eggs first hatch, the ground is too dry for the tiny tadpoles, so their father places them in his moisture-filled brood pouch so that they can breathe and grow. When they are big enough, they hop out as baby frogs! 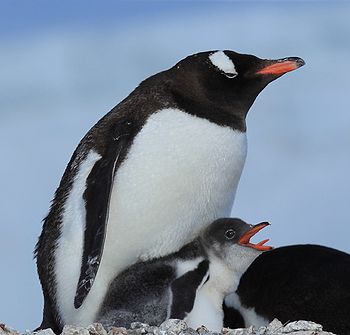 In the documentary, March of the Penguins, Morgan Freeman explains, ‘And now begins one of nature’s most incredible and endearing role reversals. It is the penguin male who will tend the couple’s single egg…’ and boy, do these male Emperor Penguins do a great job! They are considered by many as the most dedicated ‘father species’ in the animal kingdom.
After the female penguin lays a single egg, she must return to the ocean to stock up on fish. This means that dad has the sole responsibility of keeping the egg warm – in subzero conditions. He balances the egg between the tops of his feet and tucks it under a special layer of skin called a brooding pouch. Then…he waits. For 2 months he waits- starving and cold. He huddles with other penguins and moves with only small calculated motions to protect the egg. If the egg suddenly rolls out- it means certain death. When the chick does hatch, it begs for food. The father, now a skinny frame of feathers, is emaciated, but he manages to regurgitate a milky substance that will ease the chicks hunger until the mother returns. Maybe the emperor penguin is able to withstand the cold climate, due to his warm heart!? 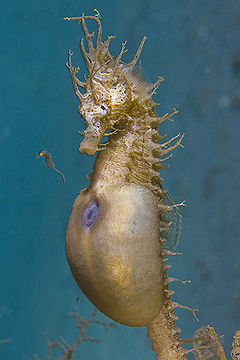 Romantic. Monogamous. Determined. Self-Sacrificing; These are not usually characteristics assigned to a fish, unless of course we are talking about the greatest fin-clad-dad to inhabit the underwater world- the seahorse. When it comes to seahorses, there is no limit to their paternal dedication. From the moment the seahorse male spots the object of his affection, the courtship begins. The couple swims on the sea floor and picks a stalk of seaweed to wrap their tails around. The female then inserts a tube inside a specialized pouch in the male (where his sperm are stored), transfers eggs and “impregnates” him. While she swims off, the male knocks his body against a rock or hard object to settle the embryos in his pouch. Over the course of 2 weeks to a month, the male seahorse’s abdomen swells. When it’s time to give birth, the father twists and squeezes his abdomen until the offspring shoot out of his body. He’s exhausted and relieved, but only moments after the painful labor is over, he goes right back to his partner, the same female he previously mated with, and mates again! Now, that’s Amore!

There are quite a few species of fish that partake in a process called mouth brooding (when an organism guards over its eggs by placing them in its mouth), but of all these species, the catfish stands out. Why? Because as manly as the catfish is – with his full beard, mustache and aggressive behavior – he has a very soft spot when it comes to ‘fathering.’ Once the female Catfish lays her eggs and the male has fertilized them, she swims off. The father Catfish scoops up the eggs (which are the size of giant gumballs), into his mouth and swims around with a stuffed face for 1-2 months. How does he eat during this time period? He doesn’t; The male catfish lives off his own body fat until the eggs hatch, and then for another 2-3 weeks until his young can grow to a decent size. The catfish papa is shrinking in weight while his offspring grow- if that’s not true fatherly love, then I don’t know what is!? 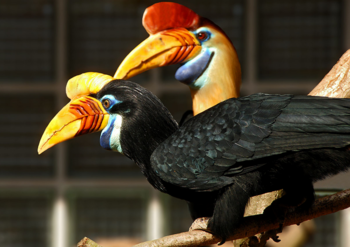 According to human standards, locking your wife and children in a tree for 3 months may not be the best tactic for maintaining a healthy family unit, but in the animal kingdom, you’d be considered a stellar dad!
The Great hornbill, famous for his huge golden beak (called a casque), encloses his ‘wifey’ and their eggs in the hollow of a tree in order to keep them warm and protected from predators. For 90 days the male will go back and forth, searching for food and delivering it to his mate. He will hand-feed er, beak-feed her by passing food through a small opening in the tree. When the day comes for their chicks to hatch, the mother breaks out of the nest. This would be a perfect opportunity to ditch his family, but the great hornbill is just not that kind of bird! With the help of his mate, the couple rebuilds the “entrance to the nest,” which actually shuts the chick back inside. Then together, the couple continues to bring food to their chick until he’s big enough to break free on his own!

Foxes have a bad reputation. They are considered sly animals that terrorize farmers and eat little girls named Red Riding Hood. Yet, when it comes to fatherhood, they are considered top notch animals! After the female red fox gives birth, she is weak and unable to hunt, so the male sets out to find food. He returns to the den –every 4 hours- with mini 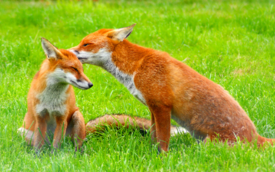 meals for his wife and kids! The only break this foxy father takes is to play with his pups. Play is a very important survival skill for foxes as it strengthens new muscles, teaches youngsters how to hunt in the wild and forms social bonds. And, it’s also pretty fun!!

So, there you have it! Although the animal kingdom may have a bad reputation when it comes to ‘fathering,’ some of the greatest, most dedicated dads out there are the ones covered in fur and scales! Happy Father’s Day!

Take Your Dog to Work Day

June 22nd is Take Your Dog to Work Day. This Pet Sitters International idea has taken hold, encouraging adoption of dogs from shelters and rescues. It’s an opportunity for everyone in the workplace to share their love of their furpals. Of course there may be some places that can’t accommodate dogs. But if your boss […]