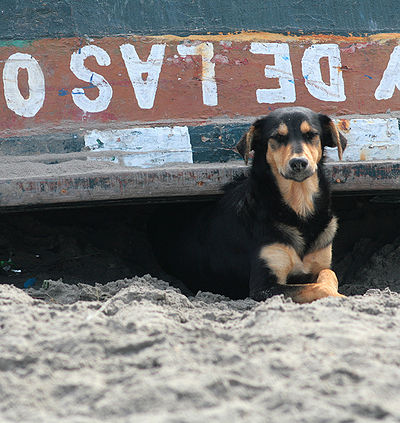 Feral dogs, dogs that are abandoned or born to feral dogs will revert back to their wild behavior and usually live in packs. In many cultures dogs are not viewed as pets, they either must work for their food or just as often find it themselves or are left to roam at will.

Fortunately, there are people wanting to save these dogs from their hard lives by adopting them into their loving homes. As noble as these wishes are, people must be aware of what taking in a wild dog entails.

Feral dogs that were originally owned by humans and socialized will offer a better chance of easier adoption. One of the major problems of feral dogs is that often they have been abandoned due to being taught aggressive behavior and then discarded. Many of these wild dogs have been so badly abused or unsocialized that the mere sight of a human terrorizes them so that they turn into terrified, shivering bundles of fur, take flight or defend themselves by lashing out at what they believe to be an aggressor.

Many feral dogs that were once domesticated are not even able to survive in the streets. Due to breeding they’ve lost the instincts that keep their ancestors, the wolves, alive.

If you are still determined to adopt a wild dog, have experience with dogs, and have the resources and time to retrain, here are some suggestions.

You can use a crate that springs closed to capture the dog. You can probably find these humane crates at an animal shelter or check online. Cover the floor of the crate with soft material. Make a path of treats, preferably meat, from several feet away to inside the crate. Check the crate often to see if the dog has been tempted inside. If you can’t find a crate, you can still use food as bait. Leave food in the same place at the same time every day. Always use a soft, calming voice and don’t make any sudden moves that might frighten the dog. Sit nearby so that the dog becomes used to seeing you and understands the food comes from you.

Once the dog is used to your presence and doesn’t shy away, try putting a leash on by making a noose at one end. It’s a good idea to wear protective gloves. Try lifting the dog while controlling the head with the leash. The dog will probably resist at first, but offering a piece of meat and speaking gently can be calming. Then still offering treats, you can lead the dog to the crate or car or a good-sized enclosure you’ve prepared ahead of time. Make sure the enclosure or pen is large enough to be comfortable for the dog and escape-proof. Don’t be alarmed if the dog refuses to eat at first – hunger will eventually win out.

Always enter the dog’s pen with great caution. It might help at first to have an opening where you can place the food inside the pen. Sit down outside and speak softly to the dog. Don’t make direct eye contact with the dog as this is viewed as an aggressive move.

Dogs react differently, a lot depending on low long they’ve been on the streets. Always use a calm, quiet tone when speaking to the dog. Crouching low and/or sitting in one place in the pen can also give the dog confidence that you are not a threat and will accustom him/her to your presence.

When the dog trusts you enough to be leashed, begin with a very short walk in the area surrounding the pen. When you feel the dog is ready, keep increasing the area of the walk. If the dog becomes stressed at any point, start over. Spend as much time as possible with the dog, always in a non-threatening voice and stance. You should also introduce other people gradually to the dog, using the same methods. Offering food is a good way to make friends.

These are just a few guidelines to assist you in rehabilitating a dog. As you can see, time and dedication is most important. Since dogs, just like their humans, each have their own personalities, response varies. Some take as little as a couple of weeks to retrain while others can take many months. Patience and kindness are key. You can be rewarded with a loving, loyal companion.

Dogs love a good run and it can be so much better when they have something to run after, especially a cat. Some dogs just want to play, but others see cats as prey and if they catch them, will seriously injure or kill them. Even during play, a dog’s powerful jaws can cause unintentional […]

Some people are naturally “dog people” or “cat people,” meaning that they naturally gravitate to one or the other. Others may like both equally and be unsure which would make a better pet for them. This article analyzes the advantages and disadvantages of cats and dogs so you can make a decision based on your […]