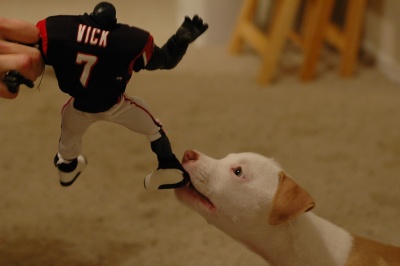 Wayne Pacelle, President and CEO of the Humane Society of the United States (HSUS) and Michael Vick on the same team?

For the past 2 years, Pacelle and Vick have worked together to stop animal fighting. Vick has traveled the country spreading the word to children about how wrong animal fighting is.

Tuesday, July 19, Michael Vick joined Wayne Pacelle on Capitol Hill. Speaking at meetings on the Hill, Pacelle and Vick urged fortifying the federal law against both dog fighting and cockfighting. Vick made this statement in front of TV cameras and journalists:

“I deeply regret my previous involvement in dog fightig. I am sorry for what I did to the animals. During my time in prison, I told myself I want to be part of the solution and not part of the problem.”

A bill was introduced by Representatives Tom Marino (R-PA.) and Betty Hutton (D-Ohio), H.R. 2492, the Animal Fighting Spectator Prohibition Act. This Act would make it a crime to be a spectator at an organized animal fight and a crime to bring a child to these savage and cruel spectacles.

Spectators are as guilty of cruelty as organizers of these fights because their admission fees and wagers provide the funding for the criminals to continue this barbarity.

Kindness to animals and treating them with respect can begin to be learned at home. You can spread the word and teach your children to do the same.

A word about Michael Vick – while we, as animal lovers, find it impossible to forget, is it time to forgive and support the good work he is doing to end animal fighting? What do you think?

“Never, never be afraid to do what’s right especially if the well-being of a person or animal is at stake. Society’s punishments are small compared to the wounds we inflict on our souls when we look the other way.”

Nitro’s Law, H.B. 108, has been reintroduced to Ohio’s House of Representatives. Nitro’s Law amends an existing law protecting animal companions. It allows prosecutors, at their discretion, to charge kennel owners with a felony, bringing stronger penalties, instead of the present misdemeanor. Kennel owners will be charged for failing to provide basic necessities and/or inflicting […]

The American Society for the Prevention of Cruelty to Animals (ASPCA) was founded in 1866 by Henry Bergh. It was the first humane society to be established in North America. Bergh was the son of a prominent shipbuilder and spent some time traveling in Europe. He visited the Earl of Harrowby, president of England’s Royal […]