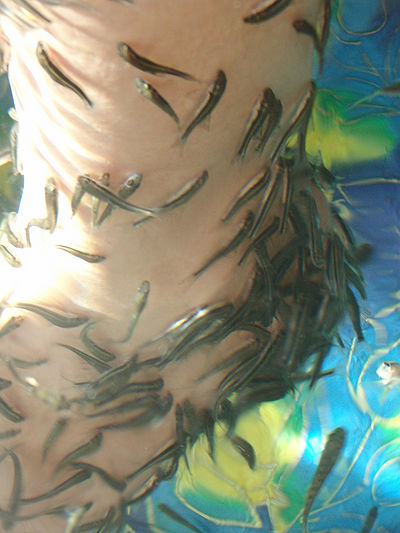 The Garra Rufa Fish is also known as The Doctor Fish, Nibble Fish, Kangal Fish, Tickle Fish, Surgeon Fish, etc.. It is originally from the Middle East, mainly Turkey, Syria, Iraq, Iran and Pakistan. It is most famous in Kangal, Turkey. There are different breeds but the one of interest here is the doctor fish , a freshwater fish found in rivers and springs where it breeds. It is 7 cm. long and has a lifespan of about 6 years. It sports a black dot on the gills and tail. In Turkey, it is a protected species to prevent exportation.

The Doctor Fish nibbles on dead and flaking skin cells. It gives temporary relief and is used in the treatment of skin disorders such as psoriasis, dermatitus and exzema. In its native habitat, it has been used for treatment for the past 400 years. While the results are temporary, they’ve been known to last several months.

Word has spread and spas have opened in the Far East and Europe. The first spas in the U.S. opened in 2008 in Alexandria, VA and later in Woodbridge, VA.

The Doctor Fish has no teeth, but licks the dead, scaly skin off leaving healthy clear skin. The nibbling can cause minor bleeding but spa owners and consultant dermatologists insist the treatment is safe. If you decide to use the spa facilities, it’s a good idea to bring your own towels and slippers and keep a distance from others in the pool for reasons of hygiene.

People who have suffered for years with psoriasis and other skin disorders say this works and continue treatments.

The Garra Rufa in your fish tank cannot be used for the treatment.

If you can stand the ticklish feeling of 500 tiny fish pecking at you, it can be an interesting and helpful experience.

Although cats are not everyone’s favorite pet, there are some people who have an abnormal fear of cats which may include symptoms such as intense fear, sweating, heart palpitations, nausea, dry mouth, tightness in the throat or chest. In some extreme cases, a person may be afraid to leave the house for fear of encountering […]

The fishing industry is harmful to the fish, other marine animals, human health and the environment. Fish feel pain and stress. Fishing methods are not regulated and include much pain for the fish. Some fish are even gutted before being killed. Farmed fish are also mistreated; they swim in cramped spaces in unclean water and […]