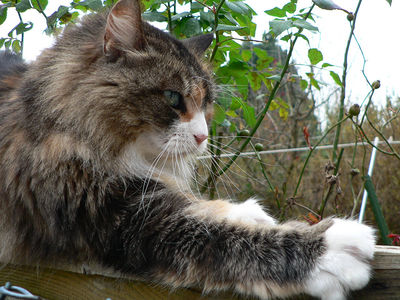 Bartonellosis is a bacterial disease in pets which can also affect humans. It is caused by a bacteria known as Bartonella and is sometimes called Cat Scratch Disease, although not always transmitted that way.

Dogs become infected with bartonellosis through fleas, ticks, sand flies and lice. Dogs that spend a lot of time outdoors such as herding and hunting breeds are at higher risk for the disease.

Infection in cats is very common, particularly those that live outdoors. It’s uncommon in cats that are kept indoors all the time. Although it is believed 40% of cats are infected at some point in their lives, they may not show any clinical signs for a long time, but are carriers.

While it is a zoonotic disease, transmittable from animals to humans, it is not fatal for humans. The greatest risk is for people whose immune systems are compromised. Bartonellosis is more commonly seen in children and young adults.

Diagnosis by your veterinarian includes blood tests, urinalysis and possibly a sample taken from the site of the scratch or bite for laboratory testing.

Bartonellosis is treated with a variety of antibiotics but there is no protocol established at present. Cats respond well to antibiotic treatment although the disease may remain in the cats’ system for several months. Dogs should be checked regularly for any recurrence of the disease.

The best method of prevention is to protect your pet from exposure to these parasites, using whatever works for you. Cats’ claws can be kept short to avoid scratches. Children should be carefully supervised when playing with a cat or kitten. If you’ve been bitten or scratched, scrub the area well using a 3% hydrogen peroxide wash.

Since bartonellosis appears to be on the rise, it might be a good idea to have a new pet tested.

Always consult with your veterinarian for any diagnosis and treatment.

If you’ve had the chore of cleaning up after a pet with diarrhea or vomiting, you would be happy to try something to help your pet. Besides your discomfort, imagine what your pet is feeling – weakness, lethargy, pain, general malaise. Pre- and Probiotics may be the answer to these digestive upsets and keeping your […]

Rocky Mountain Spotted Fever is another tickborne disease. Despite its name, it has spread throughout North and South America. RMSF is carried by the American Dog Tick, the Rocky Mountain Wood Tick and the Brown Dog Tick. The ticks bite small mammals, chipmunks, squirrels, rabbits, etc. who are infected with the disease, a bacterium known […]

Our homes are sanctuaries for our pets. But often, things we take for granted, part of our everyday lives, can pose dangers to them. Here are some tips that can help avoid serious situations for our pets. Some pets are capable of opening cabinets, drawers or closets. Sometimes we forget to close them. To avoid […]