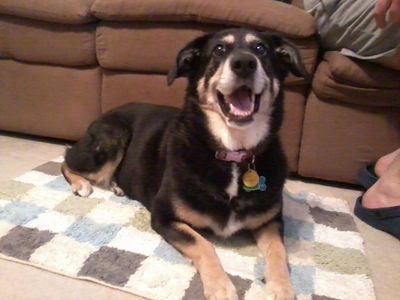 Scitzo was first diagnosed with lymphoma and started chemotherapy 2/13/08. She has officially been in remission since 2/20/08. Her onset was different than the “normal” symptoms, hers presented with a red eye for a few weeks before the appearance of any enlarged lymph nodes. When the lymph nodes did appear they were the submandibular nodes.

Scitzo did 6 months of the Madison Wisconsin protocol and has not had any maintenance chemo. She suffered a lot of side effects from the chemo and some were pretty strange. She had pneumonia, UTIs, bladder infections and diarrhea. She acquired a taste for clothing and wash cloths and ate them whenever possible. She also developed a tendency to steal items, her favorite being shoes and would carry them around in her mouth.

Scitzo sees her oncologist and regular vet once per year and has routine blood work done every 6 months. She has not been vaccinated since her diagnosis. She eats a modified cancer diet supplemented with Vitamins C and E and a fish oil capsule daily.

We are so grateful for the time we have with Scitzo, however long it lasts. We know we have been very lucky. We lost our Oneida to lymphona 3/4/09 after a battle that began 12/5/07. Scitzo followed with her diagnosis 3 months later and she and Oneida were in chemo together.

Nicole adopted Daggit as a 9 week old from a puppy rescue in Colorado. Daggit is an Australian Shepherd/Labrador mix. Daggit’s cancer story began in August of 2009. A swelling in a toe that didn’t respond to Nicole’s treatment prompted a vet visit. Daggit was treated for what appeared to be an infection but with […]