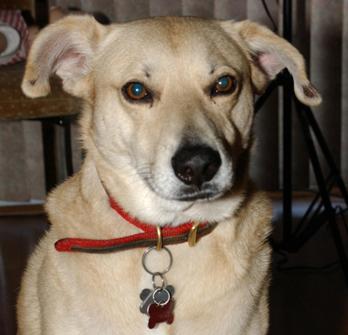 (submitted by Ann Henning, a friend)

Milo joined his forever family when he was found at an Oakland, CA adoption event in January 2006. Milo was 4 1/2 years old at the time, a Labrador mix with double dew claws on both hind legs. He had a facial scar that attested to past suffering he endured.

In his new home with Beth and Tom, Milo thrived under the care and love given him.

On September 9, 2009, Milo began limping after a walk. Diagnosis proved the cause to be osteosarcoma.

Although finances were a problem Beth and Tom continued to pursue options for treatment. They chose Femoral Head Ostectomy, (FHO), a surgery in which the ball (femoral head) of the hip is removed and replaced by a false one.

Despite no amputation or chemotherapy, and the vet’s prediction of living only 3 months past diagnosis, “Miracle Milo” proved his name and survived.

On July 25, 2010, the OS leg began to swell. Sadly there were no options left and Milo went the Rainbow Bridge on July 27th.

Priscilla is a Doberman Pinscher born 1/20/2002. In 2009, Priscilla’s owner turned her in for euthanizing because their other dog beat her up and they didn’t want to treat the injuries and then take her home to be beaten up again….. She had some deep cuts and bruises, but was sewn up and put into […]