I had a Pet Photo Day at a local Pet Supplies “Plus” store recently and there was a dog and cat rescue group celebrating the opening of their new facility within the store. The store owner had generously donated a large portion of his property to construct an area to house kittens and cats that have been rescued from the street and from other shelters. The name of the rescue group is Forgotten Friends of Long Island. Their web site is here Forgotten Friends and they have a Facebook page here: Forgotten Friends on Facebook

They had also brought with them, several rescued dogs that live in foster homes while waiting to be adopted. They don’t have room to house the dogs, so some volunteers with very big hearts become foster “parents” to these animals that would have otherwise been euthanized.

Here are the “before” and “after” pictures:
The top row photos were taken by the rescue group’s volunteers.
The rest are photos of the same dogs, taken by me: 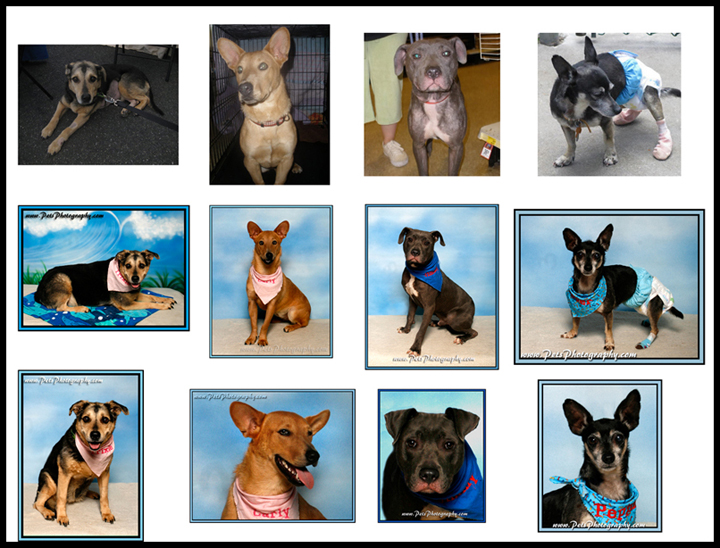 Take a look at the pictures, maybe you would like to adopt one or perhaps you know someone who might like to. Please get in touch with Forgotten Friends of Long Island.

If you are a shelter or rescue organization in Connecticut, New York City or on Long Island, I am available to do the same thing for your organization.

About The Author: Pet Photographer Richie Schwartz – With 30 years photography experience, this former Veterinary Technician, Dog Groomer and Dog Trainer is known as the “dog whisperer” of pet photographers. His animal care and photography experiences have given him an unmatched ability to create beautiful pet portraits. He has photographed over 60,000 pets and is one of the country’s most prolific and sought after Pet Photographers. He speaks at photography clubs and pet expos and offers pet photography seminars and workshops. He regularly volunteers to donate his time and services to raise funds and awareness for animal rescue organizations. Based on Long Island,NY, Richie and his staff at Pets Photography Studio provide photography services for a major pet supply chain store at 30 locations in the northeast United States.

Pit Bull Terriers have probably been one of the most maligned breeds of dog. Best Friends Animal Society is doing something to change the mistaken image of this dog. Best Friends has launched a program called Shelter Partners for Pit Bulls. The project encourages responsible pet ownership, works to increase adoptions, reduces euthanasia and improves […]

The ASPCA advises that double-decked trailers are dangerous and inhumane when used to transport horses. Double-decker trailers can be used to transport short-necked livestock such as cattle. Horses are taller, with larger heads and longer necks and require more headroom which these trailers simply don’t provide. If horses attempt to stand upright, their unstable footing […]