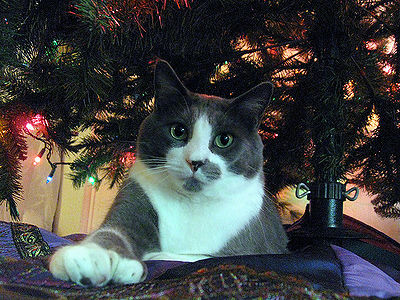 Polydactyl cats are also known as Hemingway cats, named after Ernest Hemingway, the Nobel prize-winning author. Hemingway was given a 6 toed cat by a ship’s captain and he had a special affection for these cats. His former home located in Key West, Florida is now a museum housing about 60 descendants of the original, about half of them polydactyl.

A Polydactyl or Hemingway Cat is one with more than the usual number of toes. This can affect one or more paws. The normal number of toes for a cat is five on each front paw and four on each hind paw. Polydactyl cats can have 4-7 toes on their paws, although the condition is more commonly found on the front paws.

Polydactyl cats, also called mitten foot, mitten cat or thumb cat, inherit the trait. Some of these cats have what appears to be opposing thumbs. Therefore they show an increased amount of dexterity and are able to do things like open cabinets, that normal-toed cats would have much more difficulty with.

Polydactyl cats are being bred in America as a separate breed with their own physical and behavioral characteristics. Special care needs to be taken with the nails of Polydactyl cats. Often, due to their positioning, the extra nails do not wear down themselves. If they are not kept trim, they could grow into the cat’s flesh causing infection.

Polydactyl cats may have either been brought by ships from England or are a mutation originating in New England. There is still controversy over their origin. Sailors particularly valued these cats for their extraordinary ratting abilities. They were also considered good luck at sea.

Today, most of the cats at the Hemingway Museum are spayed or neutered. The cats all have names and are fed by the museum’s caretakers. The cats are under the care of veterinarians who see to their health and well-being. They are combinations of different breeds and come in many shapes, sizes, colors and personalities.

An essential piece of equipment is a First Aid Kit for your cat and dog in case of emergencies. When you can’t get to the vet immediately, having a first Aid Kit and knowing what to do will help deal with problems. Most of these items are in our first aid kits too. rounded end […]

What illnesses are preventable in cats?

The following is a list of some illnesses that are preventable in cats. If you begin vaccinations at an early age you are giving your cat every opportunity to live a healthy, happy, long life. There is controversy over yearly boosters, whether to give or not to give them. Personally I think it’s advisable at […]