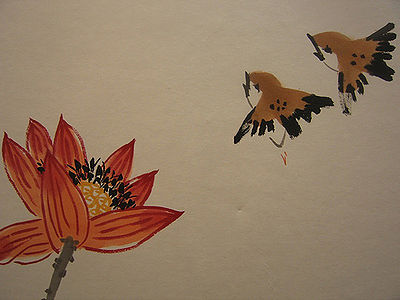 Artists have been depicting pets since the beginning of time. Often the subjects of the artwork are posed with their beloved pets and sometimes the pets are included in the piece in order to hint at something else.

The cat was a medieval symbol of lust and prostitutes were nicknamed “cats.” In the medieval artwork “Visit to the Spinner” (c.1495-1503) by Israhel van Meckenem, a cat rests on the floor next to a spinning woman while a man stands in front of her. It is thought that the cat represents lust and explains the reason for the man’s visit to the spinner.

Jan van Eyck’s “The Birth of John the Baptist” features cats in the foreground, possibly as symbols of evil since eventually John would be beheaded at Herod’s party.

Leonardo da Vinci and Auguste Renoir included cats in their paintings of everyday life. Leonardo da Vinci’s “Virgin and Child with Cat” is a typical example. Renoir’s “Sleeping Girl and Cat” uses the cat to emphasize the girl’s relaxed state.

The Nazca lines are geoglyphs and geometric line clearings in the Peruvian desert. They were made by the Nazca people, who flourished between 200 BCE and 600 CE. These drawings were made by a lot of people over a long period of time and include depictions of different types of animals including dogs.

A 14th century masterpiece which include dogs is Gaston Phoebus’s “Le Livre de la Chasse,” an illuminated manuscript depicting dogs participating in the hunt. Although today hunting is controversial, it is clear that Phoebus had tremendous respect for his 1,800 hounds. He promoted foot baths, haircuts, and ear exams for them, and calls them “the noblest and most reasonable beast.”

In the 15th century, Lorenzo Ghiberti’s created his famous bronze doors from Florence’s Baptistery. One of the panels, which deals with the story of Jacob and Esau, depicts two dogs, one hairy and one smooth, possibly symbolizing the two very different brothers.

Titian’s Diana and Acteaon is a 16th century work which depicts two dogs at the feet of the subjects of the painting. Titian’s Venus with Cupid, Dog and Partridge features a dog resting at the foot of a bed.

In the mid-17th century, Artus Qhellinus of Antwerp sculpted a greyhound bronze. The life-size sculptures is wearing the Roose family coat of arms, suggesting that this was a depiction of the family pet.

Ammi Phillips (1788 – 1865) was a self-taught artist who traveled the rural towns of Connecticut, New York and Massachusetts painting portraits. In order to save time, he reused certain elements in his portraits. One of these was a Beagle which represented fidelity.

In the 18th century some famous figures were depicted along with their dogs. For instance, an anonymous drawing shows George Washington with one of his hunting dogs. A painting by Thomas Gainsborough is a portrait of Colonel John Bullock with a canine companion.

An 1869 painting depicts a wounded Civil War soldier laying on the ground with his comrades beside him and a dog at his feet. The Artist’s Wife and His Setter Dog (1884-89) by Thomas Eakins depicts the artist’s wife and setter Harry with an uncompromising realism.

Twentieth century dog art makes use of many mediums such as photographs, quilting and collages as well as the more classical paintings.

Heather LaHaise, a contemporary dog artist, finds most of her models at PetFinder.com. She says, “These dogs are just too beautiful to go unrecognized!”

The earliest known bird paintings are Chinese paintings from mid T’ang dynasty (618-907 A.D.). Until the mid 1600s, birds generally appeared in the background of paintings while the main subject was Christian. Thereafter, artists began to paint landscapes and portraits of animals. Holbein, Rubens, Rembrandt, and Leonardo Da Vinci all included birds in their paintings. George Edwards (early 1700s) is famous for his depictions of European and Oriental birds. John James Audubon is considered by many to be the greatest bird painter to date. His 19th century art includes sketches, etchings and paintings of birds.

In Christian art certain birds are symbolic of events or themes important to Christianity. The stork announces the coming of spring and therefore represents the Annunciation. The stork also stands for happiness and for Mary’s qualities of piety and chastity.

Goldfinches are a symbol of Christ’s Passion because they eat thistles and thorns. An example of this symbolism is in Raphael’s painting, Madonna of the Goldfinch, which depicts a young Jesus stroking a goldfinch.

The peacock represents immortality and resurrection as well as the Church and sometimes vanity and pride. The peacock is depicted in Fra Filippo Lippi’s Adoration of the Magi.

The eagle is a a symbol of Christ and His Divine nature because it soars above the world and observes everything down below.The sparrow symbolizes God’s concern for the most insignificant living things and the dove represents the Holy Spirit and the virtues of peace, meekness and purity. The dove is a symbol of the covenant between God and man after the flood in Noah’s time.

Native Americans believe the “Great Spirit”, what others think of as God, is in all living things, creatures and plants and they show great respect for everything in nature. Animal symbols represent their spirit guides. Native Americans revere animals. In the past, when hunting, they would ask permission of the animal they were hunting. They […]

What Makes an Animal a Pet

How would you define the word “pet?” Which animals are considered pets and which are not? When we say the word pet, we are usually thinking about animals such as dogs, cats, birds and guinea pigs. But there are some countries where dogs and cats are considered food and there are people who raise chickens, […]