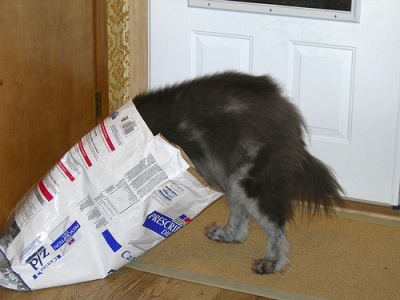 Mycotoxins are substances produced by fungi and mold. Aflatoxin is a common type of mold. Corn, rice, wheat, nuts, legumes are often contaminated with aflatoxin.

Aflatoxins appear when growth is problematic or the products are stored too long and/or under poor conditions.

According to the South China Morning Post, aflatoxins, which are potent carcinogens are an “unavoidable natural contaminant” with corn being the major source.

Due to recent droughts in the U.S. Midwest where corn is grown extensively, there has been a huge amount of mold found in the crops. Because of this the USFDA has increased the permissable amount of aflatoxin allowed in animal feed.

Testing has shown that almost every pet food including are grain-free kibble, contains aflatoxins or other mycotoxins. Other toxic ingredients found in pet foods include melamine, PBDEs (polybrominated diphenyl ethers , a flame retardant) and more. Aflatoxins are not affected by high heat.

Aflatoxins primarily affect the liver causing death of liver cells as well as cancer and suppressing the immune system. Liver damage can be cumulative.

There is no cure for aflatoxosis. Treatment is mainly supportive using antibiotics, Vitamin K1, drugs to help the gastrointestinal tract. Pets must be continuously monitored during this period.

Of course the easiest way to avoid aflatoxins is to feed pets fresh, whole foods, where possible organically grown.

To help avoid contamination, don’t purchase any pet food containing corn or other suspect ingredients. When you buy kibble, open the bag and check through to make sure there is no mold or other spoilage. Make sure to store kibble in a clean, dry area at home.

A friend on a yahoo group I belong to (Canine Cancer Prevention) shared this with us. A nurse discovered this safe, easy way to remove ticks. It works in places where it’s difficult to get to with tweezers. It also works well on dark fur or dark hair. Instructions: Apply a few drops of liquid […]

Benefits of Pumpkin in Pets’ Diet

When we think of pumpkins, a picture of Halloween comes to mind. But as most of us know, pumpkins have much more value than just as Jack-o-Lanterns. Pumpkin is used in a great many people recipes. And it’s very beneficial to your pet’s health as well. Fresh cooked pumpkin, canned pumpkin and crushed pumpkin seeds […]

About Testing and Re-testing Pets

There have been incredible advances in veterinary care over the last few years. However they come at a cost, both financial and emotional. State of the art equipment as well as the use of new drugs and vaccines have become the norm in treating pets, particularly in the field of cancer studies. Treatment is not […]