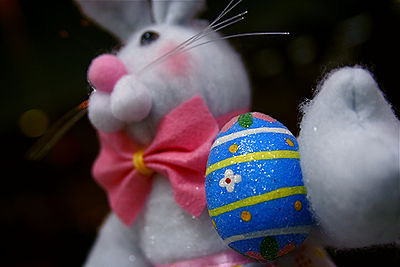 There are a number of legends surrounding the Easter Bunny and how it became part of the celebration of Easter.

The origin of the Easter bunny is supposed to have begun in pre-Christian Germany in the 1300s. People there worshiped gods and goddesses, one of which was Eastre, goddess of spring and fertility. Celebrations were held on the vernal equinox in her honor. The rabbit was chosen as Eastre’s symbol because it too represented fertility and reproduced so often.

When Christianity was introduced to Germany, missionaries, in order to ease the conversion of pagans, incorporated existing celebrations. Since the festival of Eastre occurred at the time of the resurrection, it was included in the Christian celebrations. The spelling of the goddess’s name was changed to Easter.

Eggs are another symbol of fertility and the Easter egg came to represent the resurrection of Jesus. When Roman Catholicism emerged as the major religion of 15th century Germany, rabbits and eggs continued to be part of the holiday although they were pagan beliefs.

In 1860 the first story of an egg-laying rabbit who hid them in a garden was published. Although rabbits do not lay eggs, but have live births, in the 1700s German immigrants to the United States continued a tradition of making nests for rabbits to lay their eggs. The tradition evolved into using decorated baskets and decorated eggs and exchange them for gifts.

The ancient pagans also believed that when someone ate food shaped like the symbols of bunnies and eggs, they would take on the characteristics of those symbols. And so candy in the shapes of bunnies, eggs and chicks became a tradition.

There is another legend of the goddess Eastre saving a bird whose wings were frozen in the snow and he was unable to fly. Eastre turned him into a speedy rabbit so he could escape the snow and any pursuers. Although we all know rabbits have live births, Eastre allowed him to lay eggs on one day each year and give them away to children.

Still another story is of a rabbit who waited 3 days in the Garden of Gethsemane for Jesus to return. On Easter morning when Jesus came to the garden, he was welcomed by the rabbit. When the disciples came to the garden to pray, they found some larkspurs with the image of a rabbit in their centers honoring the animal’s faith.