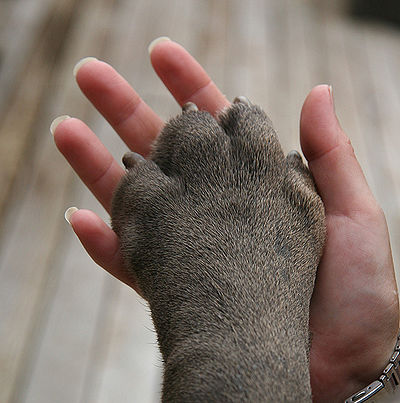 Just when you think you’ve heard it all, scientists come up with something new. It may be difficult to believe, but pets can be left or right-handed just as humans are.

Studies conducted at Queen’s University in Belfast, Ireland have shown that female dogs and cats are right-handed while their male counterparts are left-handed. However there are no differences when a pet is spayed or neutered leaving scientists to believe that hormones might play a part in the choice.

Interestingly, scientists have discovered that many animals have left or right-handed preferences.

Parrots will pick things up with the dominant claw. And those favoring either left or right appear to be smarter.

Research has discovered that a honeybee’s right antenna is more sensitive to smell.

Chimps can be left or right-handed just as humans are.

Humpback whales usually feed on the right side of their jaws.

New Scientist magazine tells us that human left-handers have more of an advantage in sports with the element of surprise. This also works when left-handers are being attacked.

Scientific studies have shown that being left or right-handed is not limited to humans, but is present in many creatures.

As many Americans are dealing with terrible financial times right now, it’s good to know the Humane Society of the United States is trying to make sure no pet goes without the proper health care. They have listed some tips to help everyone struggling to make ends meet, find alternative options to pay for their […]