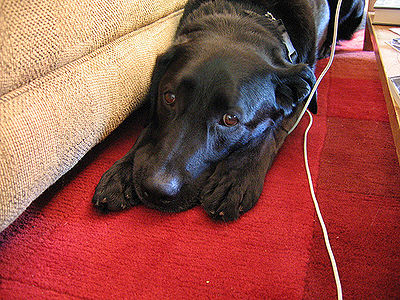 Animals are certainly more attuned to their environment than people are. But do they really sense disasters before they occur? Experts, as they often do, disagree.

Before hurricanes, earthquakes, tsunamis, tornadoes, storms, many animals head for the woods and forests where they feel safest.

During thunderstorms, lightning flashes produce nitrogen oxides and the smell produced can upset some pets.

During the tsumani of 2004 in the Indian Ocean, the news reported that elephants and other animals headed for higher ground before the tsunami hit. 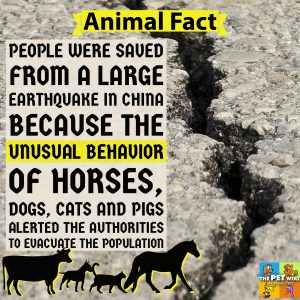 There have been recorded accounts of animals acting strangely as early as 373 BC when Greek historians told of animals leaving the city of Helice days before a massive earthquake occurred there.

In February of 1975, there was a 7.3 magnitude earthquake in Haicheng, China. People were evacuated based on the unusual behavior of animals – horses, dogs, cats, pigs and cows among them [1]. Thanks to the animals early warning, casualties were much lower than expected.

Sharks have been known to head to the open ocean and deep water before a tidal wave.

Many researchers believe that animals can feel the trembling of the earth before we do, foretelling an earthquake. Cats in particular seem very attuned to these occurrences.

Have you ever seen a dog’s or cat’s fur stand up well before a storm strikes? This may be caused by the electrical charges in the air. Animals may sense changes in atmospheric pressure well before we do.

The ability of dogs and cats to hear things that we cannot is well documented. They could be hearing sound in the earth before a disaster.

Dogs have been known to feel when their humans are about to have seizures and warn them. These a just a few examples demonstrated by animals that they can sense some things before they occur. There certainly has to be some truth to animals sensing danger before it happens.

In my own experience, we were very far from the epicenter of an earthquake, but felt the effects for several seconds. I saw no reaction in my dogs or cats before or during. Of course distance could account for that. And perhaps reactions were so subtle, I could not detect them.

Have you had any experiences with your pets sensing natural disasters? We’d love to have you share them with us.

As for pets and other animals having that 6th sense and being able to predict disasters, I’m convinced they can, but the jury is still out.

Why Are Tropical Birds So Colorful?

Tropical birds are so popular as pets because of their beautiful colorful plumage. Why do they have such colorful feathers? There are actually a few reasons. Colors help male birds attract females As they are unable to buy chocolate or jewelry, male birds attract the females with colors. Which in many ways turns the question […]