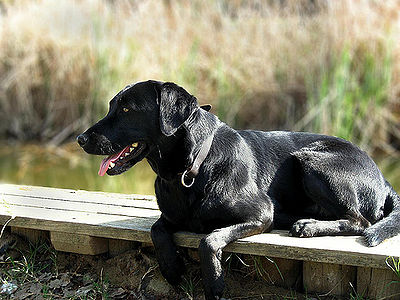 Prehistoric man discovered the usefulness of dogs in hunting for food. Ancient cave paintings have been found which depict humans and dogs hunting together. At first, dogs were used to spot and flush out fowl and small game. The ancient Egyptians expanded their role to include hunting for big game. The Egyptians developed and refined the Mastiff dog for hunting.

Wealthy Greeks and Romans devoted a lot of time to breeding dogs for hunting. By this time, hunting was not as necessary, since domesticated animals formed the basis of human nutrition. Hunting was done either for sport or to dispose of nuisance animals, such as wolves, bears, and even lions and other large cats.

With the invention of firearms it became necessary to train dogs not to react to the loud noise of a gun. The dogs find and guard the prey until the hunter can shoot it.

Controversy surrounding the morality of hunting with dogs

Aside from the issue of the morality of hunting in general, questions have been raised about the morality of hunting with dogs. Two main problems must be addressed. First, some feel that game which is killed by dogs suffer a more inhumane death than game killed by hunters’ guns. Second, the dogs themselves may be mistreated. Hunting involves the danger of getting killed by bigger prey such as bears. Long periods of time spent in the woods can cause heatstroke, overexertion, ticks, Lyme disease, foxtail infection, poison ivy, snakebites, tongue injuries, Limber Tail Syndrome, exercise-induced collapse, bloating and hypoglycemia. Elderly hunting dogs are often abandoned by their owners once their usefulness has come to an end. A third concern sometimes voiced is that the use of hunting dogs gives the hunters an unfair advantage over their prey.

As a result of these arguments, some countries have taken steps to outlaw dog hunting. Under the Hunting Act 2004, it is illegal to hunt wild mammals with a dog in England and Wales. However, Michigan, Vermont, Texas, Indiana, Wisconsin, New York and some other states have legalized using dogs to retrieve deer and other large prey.

Proponents of hunting with dogs claim that this method allows them to control the population of certain animals. The dogs allow them to get a clearer shot of their prey, resulting in a more humane death for the animal. Although hunting dogs are exposed to the elements, a good hunter will take good care of his dogs and ensure they remain healthy.

Breeds which were bred for hunting also make good household pets. They fit into an active lifestyle and get along well with children. They are loving and loyal and love to play catch. These dogs need plenty of room to run around and are best kept in a house with a yard. Dogs bred for hunting are some of the most popular pets: Labradors, Golden Retrievers, Cocker Spaniels and Setters.

Some hunters keep dogs for hunting but also treat them as a family pet. In this case, care must be taken to train the dog not to attack small children and other pets since they have been taught to be predatory. A dog which is treated as a pet will be more loyal to its owner and try harder to please, thereby improving its abilities as a hunting dog.

Raccoons are cute to look at and it’s amusing watching their antics. But it’s important to remember that they are wild animals and that’s where they belong – in the wild. Although baby raccoons can be purchased through exotic animal breeders who are licensed to sell them, people who want a pet should opt for […]