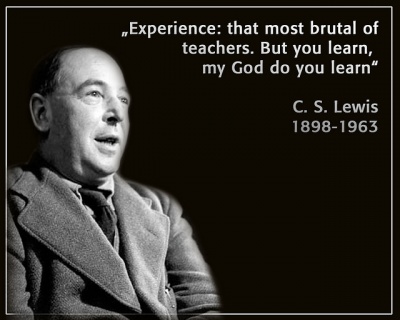 C.S. Lewis (1898-1963) was a prolific writer, poet, scholar of English literature and defender of Christianity. His most famous book is The Lion, the Witch and the Wardrobe, the first published of his Chronicles of Narnia series.

The Narnia books include many animals, some of them talking, as well as mythical creatures such as unicorns and satyrs. Lewis himself was a pet owner, primarily dogs, but also cats.

Lewis was an opponent of vivisection (damaging or fatal animal testing). He devoted an entire chapter to the subject in his book, The Problem of Pain. He objected to the practice from a Christian point of view, believing that “higher animals” had consciousness.

The Christian defender … is very apt to say that we are entitled to do anything we please to animals because they ‘have no souls’. But what does this mean? If it means that animals have no consciousness, then how is this known? They certainly behave as if they had, or at least the higher animals do. I myself am inclined to think that far fewer animals than is supposed have what we should recognize as consciousness. But that is only an opinion. Unless we know on other grounds that vivisection is right we must not take the moral risk of tormenting them on a mere opinion.

On the other hand, the statement that they ‘have no souls’ may mean that they have no moral responsibilities and are not immortal. But the absence of ‘soul’ in that sense makes the infliction of pain upon them not easier but harder to justify, for it means that animals cannot deserve pain, nor profit morally by the discipline of pain, nor be recompensed by happiness in another life for suffering in this. … ‘Soullessness’, in so far as it is relevant to the question at all, is an argument against vivisection.

In his theological writings, Lewis also discussed the pain of wild animals, who prey upon one another. He concluded that human sin in the Garden of Eden and the subsequent fall of humanity brought a fallen state to the animal world as well.

Another issue which Lewis was concerned with was the question of heaven or resurrection for animals. He believed that resurrection was meaningless to many animals, but that domestic animals could achieve immortality in the context of their masters’ immortality. In fact, he viewed the practice of taming animals as a way to make them more like humans. He saw this as a parallel to God’s making Christians more Christ-like.