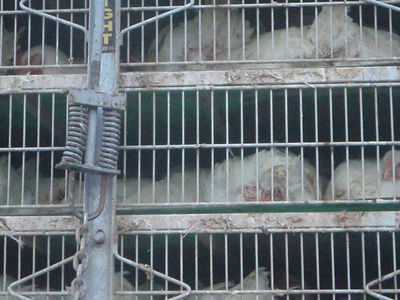 Dr. Michael Greger, director of public health and animal agriculture at the HSUS has authored a book, “Bird Flu: A Virus of Our Own Hatching.”

Dr. Greger’s interest in animal diseases affecting humans began with AIDS research. It is believed that the HIV virus began with the bushmeat trade in Africa with the slaughter of a chimp.

SARS has been linked to live animal markets in Asia, the monkeypox spread as a result of the exotic pet trade. The cockfighting industry is to blame for bird flu and long-distance live animal transport is responsible for swine flu.

Factory farming has contributed to a number of health threats including antibiotic-resistant bacteria, egg-borne salmonella, mad cow disease and a number of dangerous strains of flu.

Dr. Greger donates all proceeds from his book “Bird Flu” to the HSUS. His contributions help the HSUS continue the fight against factory farming, aiding not only the animals, but humans as well.

Here’s some sound advice from Pet Plan, a pet insurance company, telling you what to ask for when purchasing a plan for your pet(s). Pet insurance is designed to safeguard you against a major financial loss if your pet ever has an accident or becomes ill. It’s a sound investment for your furry family, but […]

News from the ASPCA on the upcoming vote on the Agriculture Appropriations bill. Dear Animal Advocates, Great news! Congress is busy setting the federal budget for fiscal year 2013, and on June 19, Rep. Jim Moran’s amendment to block use of taxpayer dollars for horse slaughter inspections was approved by the House Appropriations Committee! This […]