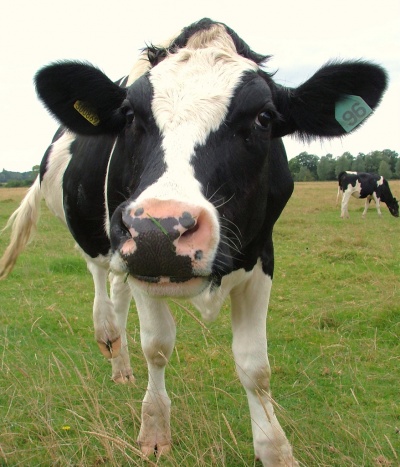 Farm animals are actually pretty smart. They have strong likes and dislikes, complex hierarchies and the ability to show their mood through facial expressions.

Cows form both lifelong friendships and lifelong grudges. They have strong family ties and have been known to walk for miles to track down their missing calves. Research has shown that cows dream just like people do! They have many facial expressions to express their moods.

Pigs have been taught to use a joystick with their snouts, in order to move a cursor on a video screen. They were able to do this as fast as chimpanzees. Pigs who have been trained to obey certain commands can remember them years later and know what to do when they hear them. They have a good sense of direction and can find their way home if they get lost.

Because chickens can’t fly, they have to be extremely aware of their surroundings to avoid predators. Their sharp brains allow them to problem solve and to understand that if an object is taken away it still exists. Chickens recognize each other by facial features and communicate by 24 different cries, each with its own meaning. They can learn tricks faster than dogs, and have even been taught to play baseball and the xylophone. Chickens will also correct their offspring’s behavior if they do something wrong.

Sheep show emotion through the positioning of their ears. Studies have shown that when the sheep knew what to expect, their reactions are different from when they are surprised. They can recognize up to 50 animals, even if they have been apart for a year.

The ability of animals to feel emotions such as fear and pain is one of the arguments against mistreating them on factory farms and on the way to the slaughterhouse. For more information on this subject, see Animal Rights and Your Food.

Description: There are very few places throughout the world where farm animals can find sanctuary to be able to live out their lives in peace, to be treated with kindness and respect. We watch these animals become comfortable and confident. We see their characters develop. We admire their intelligence and the way they embrace their […]

Keeping farm animals as pets can be fun and rewarding, but before you make a decide to add a farm animal to your family, there are some things to consider: It is important to learn how to handle and care for these animals before bringing one home. Information is available from breed clubs or societies, […]

Farm animals are a great blessing to the humanity. Horses, Cattle, Chickens, Sheep, Pigs, Turkeys, Dogs, Goats, Ducks, Geese are the farm animals. These are the domestic animals. When we hear about Farm House, we may remember George Orwell when he describes the solidarity of all four legged animals as a satire against humans who […]