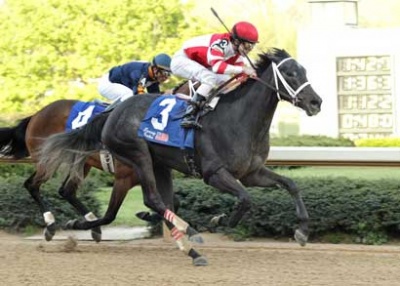 On May 23, 2008, a horse named Eight Belles crossed the finish line in the Kentucky Derby. Her two front ankles snapped and she collapsed, resulting in her being put down as she lay there. This incident caused an outcry and calls for an end to horse racing. PETA instigated a campaign to either end or reform the sport for the benefit of the horses.

The main goal of horse racing is money-making. This means that the welfare of the horses is not top-priority. Approximately a thousand horses die every year from racing in the United States, and over four hundred in the UK.

Horses are inbred specifically for racing. This means that these horses will have more health problems. Thoroughbreds, in particular, have thinner bones than other breeds. This leads to increased injuries. A horse that cannot stand on its legs will have to be put down. Many cases of use of illegal drugs to keep sick and injured horses on the racetrack have been documented. Most racehorses end their careers broken down and are slaughtered for their meat. A few lucky ones are rescued or go on to second careers.

Horse racing is big business, and it may be unrealistic to expect it to close down in the near future. However, even if horse racing continues, it can be reformed in a number of ways which would contribute to the health and well-being of the horses involved in it. One suggestion is to start training for races only after a horse’s third birthday, when its legs are fully developed and the chance of injury is lower. Another proposal is to ban whipping, since a horse being whipped will continue to run despite the fact that it is injured. Eight Belles was being whipped by her jockey as she came down the final stretch. The UK regulates whipping, and a complete ban has been proposed. It has also been suggested that racetracks take place only on synthetic tracks and not on dirt, as it is easier on the horses’ legs. Another reform is to limit the number of races per year, so that the horses don’t break down from the strain of too much racing.

What you can do

Some things you can do to help racehorses:

Untold amounts of money were spent at dog tracks, but we’re happy to report dog racing is declining. As of 2010, eleven States have banned dog racing and there are less than ten States with operational dog tracks. While this is true, breeding and shipping dogs across State lines is still legal. Emphasis on dog […]

According to law, a pet is considered personal property. But to people who share their lives with pets, they mean so much more. We consider our pets part of our family and that’s where disputes enter into divorce cases. Because of our strong bond with pets, judges will take into consideration what is best for […]