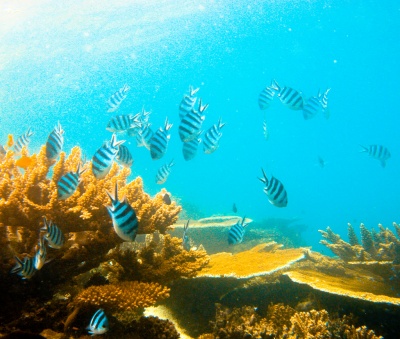 The Great Barrier Reef is the world’s largest coral reef. The reef contains an abundance of marine life and comprises of over 3000 individual reef systems and coral cays. It is located in the Coral Sea, off the coast of Queensland in north-east Australia. In 1981, it was selected as a World Heritage Site. It is considered by some to be one of the seven natural wonders of the world, and Queensland has named it a state icon.

Thirty species of whales, dolphins, and porpoises make their home in the Great Barrier Reef. Large populations of dugongs live there and six species of sea turtles come there to breed. Saltwater crocodiles live in the marshes near the reef. 215 species of birds visit the reef and seventeen species of sea snake live there. More than 1,500 fish species live on the reef, including the clownfish, red bass, red-throat emperor, and several species of snapper and coral trout.

The Great Barrier Reef Marine Park protects a large part of the reef from harmful human activities. Fishing, tourism, runoff, climate change accompanied by mass coral bleaching, and cyclic population outbreaks of the crown-of-thorns starfish have all negatively impacted life in the reef. Shipping accidents, oil spills, and tropical cyclones have also been a problem.

Climate change is considered by many to be the biggest problem. When the ocean warms too much, coral bleaching results.
The then coral loses the ability to maintain its parasitic control on its zooxanthellae and may die. Climate change also causes some fish to seek waters with more appropriate temperatures and this affects chick mortality in sea birds. Sea turtles are also negatively impacted by climate change.

Farms pollute the rivers of north eastern Australia with fertilizers and pesticides. These harmful substances find their way into the waters of the Great Barrier Reef.

The crown-of-thorns starfish preys on coral polyps and causes devastation of the coral reef. Outbreaks of these starfish occur naturally but are also exacerbated by poor water quality and overfishing of the starfish’s predators.

Overfishing disrupts the food chain in the reef. It also causes increased water pollution from boats, by-catch of unwanted species (such as dolphins and turtles) and habitat destruction from trawling, anchors and nets. Fishing in The Great Barrier Reef Marine Park is prohibited, but fishing is pursued commercially in other parts of the reef.

The Great Barrier Reef is a popular route for commercial ships. Many shipwrecks have occurred in the reef. On April 3, 2010 a huge oil spill occurred in the reef as a result of a ship running to the ground. The damage was extensive; some of the areas affected have become totally devoid of marine life. Scientists say it may take 10-20 years for the reef to fully recover.

Fish of the Great Barrier Reef:

Fish lice are known as Argulus. They are parasitic crustaceans that enter your fish habitat hitching a ride on new fish or plants. They are usually found just beneath the fish’s scales, behind fins or near eyes and gills. The lice can appear nearly transparent. They feed off the fish by injecting digestive enzymes into […]