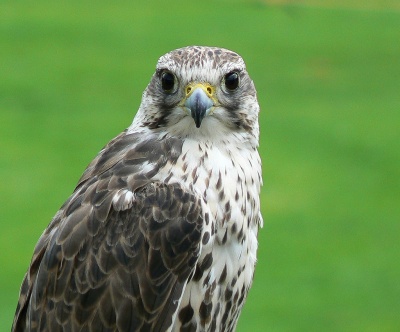 The sport of falconry is believed to go as far back as 680 B.C. in China. It was probably introduced to Europe arouned 400 A.D. with the Huns and Alans invasions. Falconry now applies to all trained birds of prey used to catch game.

Due to the rarity of eggs and the expense of raising bird of prey chicks and the time involved, falconry was a sport of noblemen.

This group of birds of prey are known as Broadwing:

Golden Eagles are not often used in falconry because they are difficult to train and manage. They also hunt over open ground and present a danger to people in populated areas.

Buzzards, known as Hawks in North America can be found worldwide. The red-tailed Harris Hawk (genus Parabuteo) is the only raptor in this genus. Its habitat stretches from southern Texas and Arizona to northern South America. It is popular because of its friendlier nature and outstanding ability to catch rabbits. The Harris Hawk will also hunt in groups which it does in the wild.

The following group is known as Longwings:

Peregrine Falcons, Lanner Falcons and Gyr Falcons (genus Falco) is a group found worldwide. Most Falcons view other birds as their prey. The Peregrine attacks other birds exclusively.

The Shortwing group is know as Accipiters (Goshawks) and have been trained in falconry for hundreds of years. Used in Europe and North America, they are known for their swiftness and violent attacks.

Owls (genus Strigidae) – The Eurasian Eagle Owl and the Great Horned Owl depend on hearing rather than sight for hunting. They are more difficult to train but are as intelligent as Hawks and Falcons.

Falconry is a regulated sport in the United States. Falconers are required to have state and federal licenses to practice falconry. In the U.S. they must pass a written test, their equipment and facilities are inspected and they must be apprenticed to a licensed falconer for two years.

The Migratory Bird Treaty, the U.S. Fish and Wildlife Service and the Convention on International Trade on Endangered Species all have input into which birds may be hunted, which captive-bred raptors may be bought, sold or traded and the import and export of cetain animals.

Falconry is legal in all States except Hawaii and the District of Columbia. Falconry is practiced worldwide where regulations are according to individual countries.

Should You Change a Parrot’s Name

According to research at Cornell Labs of Ornithology at Cornell University, birds have “signature contact calls” meaning that each bird has its own sound or name. Baby parrots listening to their parents, adopt their own names using similar but not the same sounds. Birds that are not raised do not have the opportunity to create […]

When bad weather approaches, birds, just like we humans, instinctively seek shelter from cold and storms. Birds that nest in cavities in trees can hide out in their tree holes. Small birds can find protection in thick hedges or the downwind side of a tree. They tend to find places closest to the ground where […]