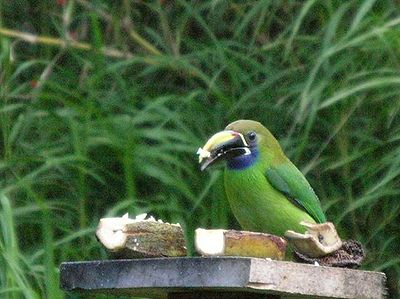 Wild parrots are being captured illegally causing a major population decline. Part of the problem is the encroachment by humans into their habitat. But an increasing number lost is due to the illegal trade of these birds.

In Mexico alone, up to 60,000 parrots are dying yearly because of the inhumane treatment at the hands of these illegal trappers who use several methods of capture.

The resin from ficus trees is boiled making a sticky substance similar to gum. Branches are coated with the gum forcing the birds to stick to them. Although still used illegally, this practice was outlawed in 1983.

Traps, similar to those used for dogs and cats have a door which snaps closed when the bird lands on a perch set up for the action.

Fishing line is strung across tree branches trapping birds. This is also illegal as many bird suffer leg injuries,

Nets are the usual method of capture and are legal which doesn’t make them any more humane.

Baby parrots are sometimes caught by hand. Otherwise, the tree is cut or chopped down to make them more accessible. Often the small birds are killed in the process and future nesting in the trees is prevented.

The statistics of birds who do not survive capture is staggering. During capture 7% die. Stuffed together and confined in cages, 25% do not survive. Transporting the birds, another 31% are lost.

After capture, the birds are not given necessary attention and succumb to shock, asphyxiation, crushing, dehydration, starvation, etc. Of those birds that survive this cruelty, 50% die before sales because of their exposure to dangerous environments or as a result of their previous mistreatment.

Since the existing laws governing birds are not enforced, some illegal trappers are not even aware of the plight of the birds once captured, the onus lies with the organizations responsible for monitoring the situation. Of course most trappers just ignore the laws,

It is estimated that of every 100 birds captured, only 23 will survive.

You, the public, can help stop this inhumane treatment and trapping of all parrots. Unless the seller can show proper documentation of the birds for sale, do not buy one. Purchase only birds that have been bred by an authorized seller.

History of the RSPCA

In Old Slaughter’s Coffee House (named for the original owner), near Picadilly Circus in London, on the evening of June 16, 1824, an historic meeting took place. It was a meeting to discuss protecting animals from cruelty. Fortunately the meeting’s success has been felt around the world. Two years earlier, Richard Martin, a member of […]