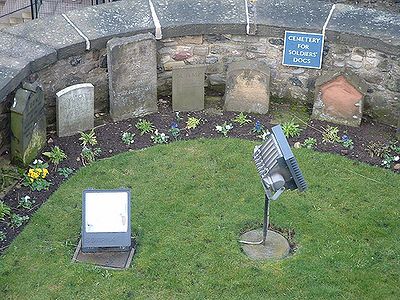 Edinburg Castle comprises a large part of the city’s skyline.

Completed in 1588, it is a major tourist attraction. There is much to see in the castle and surrounding grounds including the Scottish Crown Jewels and the Stone of Destiny, both used for coronation ceremonies.

The Scottish National War Memorial commemorates the Scots who fought and died in World War I and following conflicts. The addition was made after World War I.

One of the most admirable attractions is the dog cemetery. It is a beautifully landscaped small garden. The cemetery has been in existence since the 1840s. Many years ago when the castle, which was also a fortress, was cut off from the rest of the world, there was a need for a burial place for regimental mascots and officers’ pets. Visitors are not allowed in the garden and it can only be viewed from above.

Underneath the park is, of all things, a train station.

An essential piece of equipment is a First Aid Kit for your cat and dog in case of emergencies. When you can’t get to the vet immediately, having a first Aid Kit and knowing what to do will help deal with problems. Most of these items are in our first aid kits too. rounded end […]

Can I find out what kind of puppy I adopted?

You can ask the people at the place where you adopted the puppy. There are places where you can submit DNA which will tell you what kind of dog it is. You can compare your puppy with others and see if they share the same characteristics. You can ask your veterinarian. Facebook Comments Box

As you all know I am the Chief Canine Officer for my dad’s company, Flexcin International, in the FlexPet division. We love to hear from our canine customers about how well FlexPet is working for them. Of course the feedback tends to come from their humans, but we think it’s important to share their stories […]