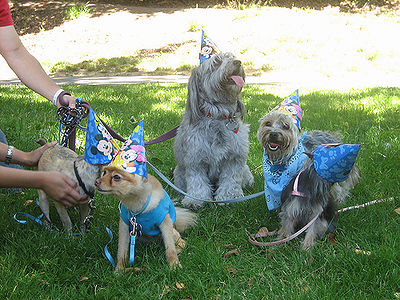 As much as we love our dogs, we do need interaction with other humans. Do dogs feel the same way?

Interestingly, many dogs enjoy the company of other dogs and some are even depressed by the lack of companionship with their own kind. The advent of dog parks has allowed dogs lots of time to play and form friendships and they’re loving it.

Dogs are descended from wolves who have a complex social structure, living in packs. Wolves are dependent upon a leader and each other for survival and form close attachments. Our dogs look upon us as the leader and the extended family and friends are pack members.

When observing dogs together, their play with each other is somewhat different from their play with us. Many dogs develop very close and special relationships with other dogs. Observing these dogs at play appears more like warring. But don’t worry, dogs can play rough but seem to know when to stop before play escalates into something more serious. Many times at dog parks our pals are very reluctant to leave their friends when it’s time to go home.

People with multiple dog homes understand the dynamics of doggie friendship and living together.

Not all dogs can be friends with each other. For reasons we can’t explain, some dogs take dislikes to certain other dogs, so best to keep them apart.

Some dogs are loners and are totally happy only with their humans. While they may not be aggressive towards other dogs, they refuse to interact with them.

You’ll hear many stories of dogs who have gone to the Rainbow Bridge and how their pals pine for them.

My own experiences have been with both loners and close pals. For example, my little terrier Toto was friends with my then GSD, Samantha. After Sam passed away, Toto never befriended another dog and was content with my friendship.

Two years later when I brought home German Shepherd Quanah, my rottie mix Timo helped with her care. They became very close friends. When I lost Timo to cancer, Quanah’s behavior changed dramatically – she was almost inconsolable. She would only go into the garden to relieve herself. She followed me everywhere, wouldn’t let me out of her sight.

Quanah’s depression worried me so that I decided to adopt a shelter dog for her in the hope that they would become friends. After carefully introducing them, it worked. Murphy, a year-old, energetic pitbull mix brought joy to our home and life back to Quanah.

Dogs are not the only animals that develop friendships. Studies have shown that many species have close relationships within their groups. And then there are inter-species friendships, but that’s for another time.

So you’ve trained your dog to go outdoors to relieve him-herself. But when you come home after a long day or someone comes to visit, your dog is so happy and excited or even stressed that s/he loses control and piddles. Your dog hasn’t forgotten the house training rules, this is a behavioral problem. But […]

Will Your Dog Accept Muzzling

Muzzling a dog is an unnatural condition to them. Some dogs will put up quite a battle when the muzzle comes into view. But there are times when a muzzle is a very necessary tool. Dogs in pain, whether your own dog or an unknown injured one you’ve stopped to help, will lash out at […]

Accidents happen and suddenly you find your dog has gotten loose and run off. You do all the things necessary to find him/her, but your dog is missing for several days or longer. Finally, your persistence pays off and you get a call that your dog has been sighted or you spot the dog yourself. […]