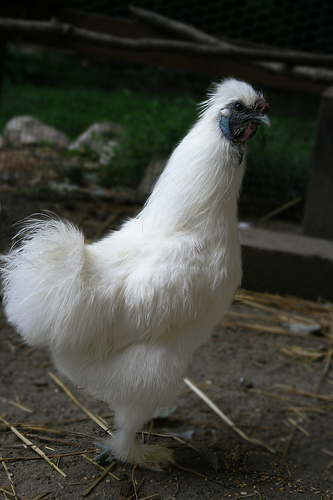 Silkies are an ancient, Asiatic breed of poultry, most notably known for their fur like feathers. While the structure of a Silkies feather is much like other birds, they lack barbicels between each strand of ‘hair’ on the feathers shaft. These barbicels are tiny, cartilage hooks, that act like Velcro and give a feather its shape. Because these barbicels are not found in Silkie feathers, each hair is allowed to move freely, giving the bird the appearance of having fur. Their ‘fur’ functions the same way that hard feathers function on other birds, and keep the bird warm, and dry. It is commonly rumored that because of the feather structure, Silkies tolerate colder climates better. However this information has not been tested, and cannot be guaranteed.

In addition to their unique feathers, the Silkie is also known for its black or purple skin, and 5 toes. The condition of having 5 toes is known as polydactyl, and it is only shared by a few other breeds of poultry. The skin and bones of the Silkie are also very unique, having a dark purple coloring. In Asiatic countries, they are commonly known as ‘black chicken’, and the purple skin and bones are thought to have healing properties for ailments such as arthritis and other painful diseases.

Silkies are a very old breed of poultry, and are thought to have originated in China. References to a ‘cat like chicken’ have been found in records of Marco Polos travels through China in the 15th century.

Silkies come in a variety of colors, but only 7 are recognized and widely available in the US. The American Poultry Association and the American Bantam Association list white, black, blue, buff, gray, partridge, and splash as ‘standard’ colors. Other colors such as Lavender are considered ‘developmental’, and aren’t part of the breed standard. Silkies are also available in a multitude of mixed colors and varieties. The white coloration is the only naturally occurring variation of the Silkie, and all other colors were introduced by man made breeding processes.

The Silkie hen is one of the best mothers in the poultry world. In fact, many game bird breeders use them as natural incubators for other birds like pheasants and quail. Hens have been known to sit on clutches of eggs for days, sometimes even dying of dehydration.

The size of Silkies varies from males to females, but average weight is approximately 3 to 5 pounds. Silkies are also one of the only true bantam breeds, meaning that they were not bred down from larger birds. They lay a small egg that is only about 2 inches in size, and can vary from white to a cream colored shell.

Another unique feature of the Silkie is the large crest of feathers, or ‘top knots’ on their heads. These top knots can sometimes cause decreased vision, so Silkies should be protected from other prey birds such as hawks and vultures. Silkies also cannot fly, which is another reason for added protection from predators.

Silkies have a very docile temperament, and often learn to follow their owners like puppies. They are a very interactive breed, who appreciate human interaction, and are perfect for children who are interested in raising poultry.

Contents 1 Do you want a duck? 2 Caring for ducklings 3 Nutrition 4 Swimming Do you want a duck? Ducks are very social animals so you should keep several ducks, and not just one. They need a minimum of 10 ft. of space per adult duck, in addition to shelter and a swimming area. […]

Although goats are usually considered farm animals and not pets, their friendly nature and natural curiosity make them good pets. The most common breeds kept as pets are the dwarf or pygmy varieties. Contents 1 Choosing a goat 2 Care 3 Nutrition 4 Video 5 External links Choosing a goat Some things to consider when […]