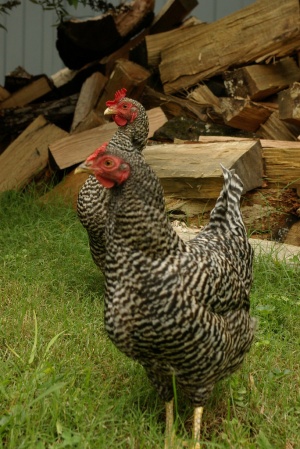 The Plymouth Rock breed (also called Rock) was developed in the United States. The most popular variety is the Barred Rock, but it also comes in blue, buff, Columbian, partridge, silver-penciled and white. Until World War Ii, this was the most popular chicken breed on farms in the U.S., because of its hardiness, docility, broodiness, and excellent production of both eggs and meat.

These chickens are hardy and do well in cold weather, so they are recommended as backyard pets. They are friendly and tolerant of confinement, although they obviously prefer to free range. Due to their popularity as exhibition birds, Rocks have been bred for appearance and their egg production has been reduced as a result. They are still pretty good layers, though, laying about 200 eggs a year.

Brahmas came to the United States from Asia in 1846. They reached England in 1853 when Queen Victoria was presented with a quill pen made from a Brahma feather. Brahmas were then known for their excellent laying characteristics, but breeding for color has reduced these abilities. Brahmas come in light, dark, buff and partridge. They […]

A mule is an animal sired by a female horse and a male donkey. Although mules have a reputation for being stubborn, it is really a sign of their intelligence. Mules are cautious and can’t be forced into doing anything they don’t want to do. They will not allow themselves to be worked to death, […]