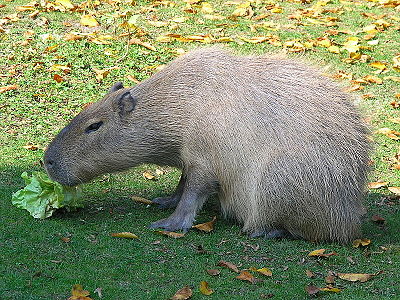 Capybaras are the largest existing rodent in the world. They are related to guinea pigs, chinchillas, agoutis. Native to Venezuela, Capybaras inhabit much of South America, living in densely forested areas near water – lakes, rivers, streams, ponds, marshes, swamps.

They stand about 20-25 inches tall and weigh from 75-150 lbs. although larger specimens have been seen. Capybaras are social animals and usually form large groups of at least 10-20 with a dominant male at the center.

Capybaras are herbivores and graze on a variety of grasses, aquatic plants, fruit and tree bark. They are like guinea pigs in that they can’t synthesize vitamin C. In captivity, to avoid disease, they must be given supplements of the vitamin.

Capybaras will eat their own feces which helps with the digestion of the grasses that make up their main diet. They don’t have perpendicular jaws and chew their food by grinding back and forth. Sometimes they regurgitate the food and will chew it again, similar to a cow chewing its cud.

Capybaras like to make chattering sounds among themselves and will bark, sounding like a dog if threatened or gathering the young ones.

As semi-aquatic animals, they are excellent swimmers and can remain completely underwater for up to 5 minutes. They hide from predators in this way. They can also sleep in the water, with their noses extended out. In hot weather, especially in mid-day heat, they will remain in the water, coming out to graze in the early evening.

In some areas of South America, Capybaras are hunted for their meat and skins. Often, they are also farmed like other livestock.

In captivity they can live up to 12 years. However, in the wild, Capybaras are a favorite prey of jaguars, pumas, ocelots, eagles and the anaconda.

The Capybara’s front and cheek teeth grow continuously, just as with other rodents. They wear down naturally when eating grasses.

In some states in the United States where it is legal, Capybaras are kept as pets. They are gentle animals and are interesting and unusual pets.

Although not considered a threatened species, in some areas of South America, they are killed because humans see them as competition for their livestock. Fortunately Capybaras are able to breed rapidly which helps ensure their survival.

Dog training offers dog owners an easy way to teach their dog obedience and good pet manners. Before you choose a dog training course and get started on the road to perfect pet obedience. If you are a dog owner, chances are that you have contemplated dog training for your dog or have in fact […]

The thought of a visit to the veterinarian’s office sends many pet owners and their pets into a panic. There are pets that are so terrified that when close to the office, they may experience physical problems and might injure themselves and their humans trying to escape. There is an alternative – house call vets. […]

Most aquarium cool-water fish benefit from a winter cool down. Without it, they may not breed in the summer and colors will be dull. Fish, like other animals and plants, use their stored fat to rejuvenate their bodies and produce eggs. It’s best to cool down your cool-water fish gradually as sudden changes cannot be […]