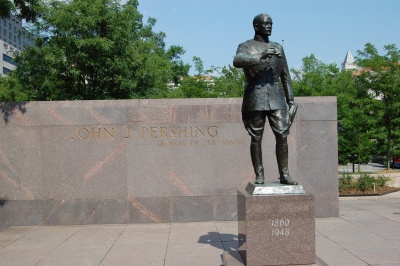 Black Jack was a coal black Morgan/American Quarter Horse mix. He was named after General John J. (Black Jack) Pershing of World War I fame and served in the 3rd U.S. Infantry Regiment known as The Old Guard.

Black Jack was born in Oklahoma, January 19, 1947 and began army life in 1952. He had the honor of being the last Quartermaster issue horse branded with the U.S. Army brand.

Black Jack served in more than 1,000 army full honor funerals as the riderless horse. Most of the funerals took place at the National Cemetery at Arlington. As a symbol of a fallen leader, boots were reversed and placed in the stirrups. The reversed boots represent the fallen leader looking back on his troops for the last time.

The custom of a riderless horse with boots reversed is believed to date back to Genghis Khan when horses were sacrificed to serve their fallen warriors in the next world. The riderless horse came to symbolize a warrior who would ride no more.

Black Jack won fame for several of the state funerals he participated in: President John F. Kennedy in 1963, President Herbert Hoover in 1964, President Lyndon B. Johnson in 1973 and 5 star General Douglas MacArthur in 1964.

Black Jack was retired in June of 1973 to the 3rd U.S. Infantry Stables. He lived to be 29 years old, leaving behind a dedicated military career. His remains are buried on Summerall Field in Fort Myer, Virginia. Black Jack is the second horse in American history to be buried with full military honors. The first was the brave Comanche.