Dog of the Month for August

An ancient African breed, the Basenji came to America in the 1930s. Although not a barking dog, this hunter howls and whines.

What is the origin of the Basenji?

The Basenji is an ancient breed discovered in Central Africa. They were used by pygmys as hunters in packs. Basenjis came to England in 1929 and soon after were brought to America. The name Basenji means “bush thing.”

the Basenji is a small dog, 16-17 inches tall, weighing 22-24 lbs. The small ears are erect. Eyes are almond-shaped. Feet are small and oval-shaped. When the ears are erect, fine wrinkles are visible on the forehead. The tail bends forward in a curl over either side of the back. Coat is short and smooth. Colors are red, black, black and tan or brindle with white markings generally on feet, chest and tips of tails, sometimes a white collar and face blaze.

What is the temperament of the Basenji? 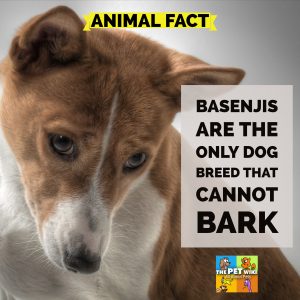 Basenjis are dogs that don’t bark, but they are not silent. They make a sound something like a yodel and they howl and whine. They can be stubborn and independent. Early training with positive reinforcement are necessary to avoid bad behavior. Basenjis are very curious and have been described as catlike in their habits. They love to climb, so fencing should be secure. They are wary of strangers. There should be plenty of toys to satisfy their chewing needs. Basenjis have high energy levels and need lots of exercise, including long daily walks. They can live in apartments if adequate exercise is provided.

What is the Basenji used for?

Once a hunter of small animals, the Basenji now competes in obedience and agility trials. The Basenji will be loyal and devoted to its family.

Basenji’s are the only dog breed that can not bark.

Vital Statistics: Place of Origin: United States Group: Scenthound Height: Males-22-25 in., Females 21-24 in. Weight: 65-70 lbs Life span: 10-13 yrs. Trainability: high Good with children: yes Good with other pets: yes, but has high prey drive August’s Dog of the Month! George Washington was one of the first owners of this lively, friendly […]

Vital Statistics: Place of Origin: Italy/France Group: Companion Height: 10-13 in. Weight: 9-18 lbs. Life span: 12-15 yrs. & up Trainability: moderate Good with children: yes, with older, well-behaved children Good with other pets: yes, usually What is the origin of the Lowchen? The Lowchen originated in Southern Europe and may be the rarest purebred […]