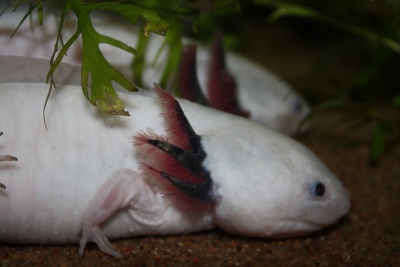 The word axolotl (pronounced ´axe-ah-lot-l´) is derived from a Nahuatl word (the language spoken by the Aztecs) that has been variously translated as ´servant of the water´, ´water-dog´ and ´water-doll´, among other things.

These creatures are a species of salamander. Unlike the salamander, axolotls retain some larval characteristics throughout their entire lives, including the gills, therefore confining them to a water-bound existence. It is possible, through genetic variations and hormonal treatment, for an axolotl to undergo metamorphosis and become a salamander.

Axolotls can grow to be about 30cm long and weigh as much as 300g. They have a tadpole-like appearance but are more slender in the body, with a fin that runs from the back of the head, down the spine, and along both edges of a long, vertically-flat tail. They have four lizard-like legs and feathery gills that surround the head, a bit like a lion´s mane.

There are five main colour varieties of axolotl. The wild type is a speckled olive green in colour but albino, white, gold and black are also common. Female axolotls have a wider head than the male bu

t the main distinguishing difference is the presence of two swellings between the back legs of the male.

Axolotls actually have poor eyesight and no eyelids which makes them very sensitive to light. With this in mind it is advised that when housing axolotls as pets, then they should be kept out of direct sunlight and away from bright aquarium lights.

Axolotls are able to regenerate lost body parts over time which, considering their habit of nipping off each other´s limbs if they get too close, is a very handy trait to have indeed. 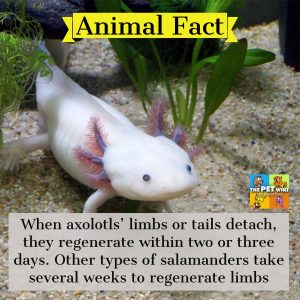 Left alone, an axolotl is a very placid creature, most often found lazing at the bottom of their tanks, or taking leisurely swims around its home. Axolotls kept together, on the other hand, can tend to be aggressive towards each other, especially if they feel agitated, overcrowded or hungry. Some owners keep other tank inhabitants such as goldfish or guppies, but these fish can tend to either get gobbled up by the carnivorous axolotl or can become a blight on the creature by nibbling at its gill feathers. It is best then, to keep axolotls solitary.

As mentioned, axolotls are carnivorous and are natural predators, so they will eat a variety of meats. Bloodworms, pellets, cubes of heart and lean meat are their favourites, and can be purchased from pet food stockists. Food pieces must be kept small, because they cannot chew. They eat by sucking the particles into their mouths and swallowing the food whole.

It is best to feed an axolotl a small amount daily, about six to ten pellets. They can go for several days without eating, not a recommended practice but good to know if you are going away for a weekend. It is also best to feed them in the evening, when they are most active.

In the wild, axolotls are native to Lake Xochimilco in Mexico, which is a glacial-melt fed lake, therefore axolotls tend to prefer cooler water. A temperature of around 14°C is considered ideal. For a single axolotl a well-filtered tank of around 60cm is sufficient.

The bottom of the tank should be lined with some form of substrate to help promote the formation of helpful natural bacteria that will work with the filter in keeping the water clean. There are a few different schools of thought surrounding what kind of substrate to use, ranging from gravel to marbles. Small particles of gravel tend to get gobbled up by a hungry axolotl searching the floor of its tank for food. While these particles of gravel are not life threatening to the creature, they can tend to sit in their stomachs for prolonged periods and cause some discomfort. Using marbles has also been suggested, as they are too big for an axolotl to suck into its mouth, but due to their smooth texture the amount of good tank-cleaning bacteria that they harbour is minimal. Polished river pebbles may be a good balance; they are too big for the axolotl to swallow, and also promote the formation of natural good bacteria.

For axolotls a pH level from 6.5 to 8.0 is acceptable, but 7 to 7.6 is ideal. The water should also be free of chlorine, which unfortunately is in many municipal water supplies. This can be combated though by using a water-ageing product that can be purchased from most pet stores or aquarium supply centres.

Other items can be placed in the tank to decorate it, especially a place for the creature to hide, like a hollow tube. It is not recommended that the tank have plant life in it though, as these plants can get caught in the axolotl´s gill feathers and cause harm.

The tank should be cleaned out totally at least once a fortnight, including changing the filter media, as axolotls tend to be fairly messy pets. Any uneaten food and any waste should be immediately removed from the tank and at least one third of the water changed twice a week.

An axolotl can live for up to 15 years and some have even been reported to survive to the 25-year mark, so given the right care they make great long-term pets.

The main cause of health problems in axolotls are fungal and bacterial infections that are generally due to stress or injury. These infections damage the slime-coat which cover their skin and can be treated with medications available from pet stores. Of course, if these fail to have the desired effect, a vet should be consulted for stronger medications.

By The Editor – http://www.petstreet.co.uk/ The UK’s leading social network for pet lovers.

There are many species of Tarantula available as pets. Housing and care very for the over 800 different species, so you must have information on the particular species you would like to own. The most popular is the Chilian Rose, native to Chile. They are hardy and easier to care for than some other species […] 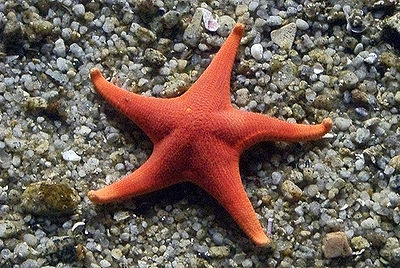 When you hold your chinchilla and s/he tries to escape by jumping away, you may wind up with clumps of fur in your hand. The chinchilla fur is not simply falling out due to age. It’s called fur slip and it usually occurs when the chinchilla is trying to escape from an unwanted situation. Chinchillas […]

Although ants can’t be handled and played with, they can be fun and interesting to observe. You can watch them play with each other, work together and create tunnel systems. They are not noisy or messy and don’t consume a lot of food. Contents 1 Choosing ants 2 Housing 3 Nutrition 4 Ant Farms Choosing […]