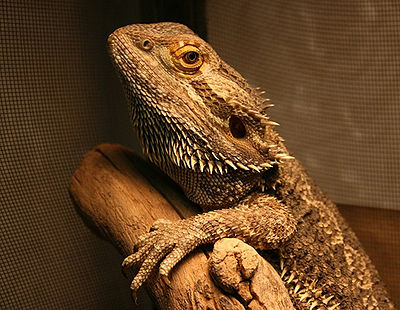 Until recently, the Australian outback was uninhabited by primates or other mammalian predators, making it a perfect habitat for reptiles. Lizards were especially adaptable to the hot, hostile environment and thrived in the outback. Australia has many reptiles which are dangerous to humans, including the world’s largest reptile, the Saltwater Crocodile.

Australia has a large diversity of reptiles, with over 860 species. 204 of this species have been nominated by conservation agencies as warranting threatened status. The main reasons for endangerment of species are: loss of habitat, overgrazing by stock, cropping, urban development and predation by introduced mammals (mainly foxes, cats and rats.

In the Coober Pedy opal fields of South Australia, abandoned mine fields are a constant danger to reptiles living in the wild. As many as 10-28 million reptiles are trapped and killed by these mines.

The Australian government allows only certain reptiles to kept as pets. The list can be downloaded from the Department of Environment and Conservation website.

When Purchasing a Reptile

So, you’ve decided you want to share your life with a reptile. You’ve researched and probably have a good idea as to the type of reptile you want. Here are some tips that we hope can help you with your purchase. The best reptile to choose is one that has been bred in captivity. Captive-bred […]

American Tortoise Rescue is a California based, non-profit organization protecting all species of tortoise and turtle. May 23, 2019 was the 10th annual World Turtle Day sponsored by the rescue group. Susan Tellen and Marshall Thompson founded ATR 20 years ago and advocate humane treatment of all animals including reptiles. Experts predict that within the […]

When reptiles hibernate, the term used is brumation. Preparing for brumation, the pet slows down considerably, stops eating, drinking and defecating. Brumation or hibernation is a natural process that occurs in some animals. When you observe your pet get ready to brumate, you can help with the transition. First, make sure your pet is healthy […]