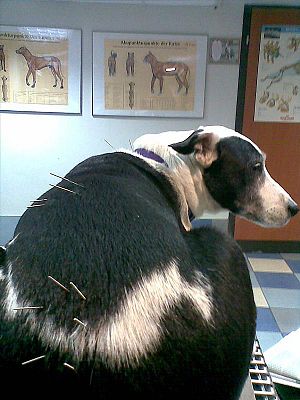 We consider our pets members of the family and it’s heartbreaking to see them suffering and in pain.

Today, more and more people are turning to acupuncture as an alternative therapy to treat ailments and the pain that accompanies them.

Acupuncture is used mainly for cats, dogs, horses and farm animals. But birds, ferrets and rabbits have also been treated.

Where once people were skeptical about its effectiveness, acupuncture is now an accepted, non-invasive therapy. It has been used successfully for relief in many types of ailments such as hip dysplasia, chronic joint diseases, respiratory, gastrointestinal, neurological and urinary tract disorders.

The origin of acupuncture is cloudy. It may have begun in India, Korea or China. But acupuncture is known as an ancient Chinese practice dating back about 5,000 years. First practiced on humans, it is believed that acupuncture was used on animals beginning about 136-265 A.D.

Instead of the very fine needles, sharp stones were used with horses and other working animals on specific points in the body.

The Chinese believe that illness is caused by an imbalance in the body. To correct this imbalance, fine needles are inserted in any of 365 acupuncture points. Western medicine explains these points as being located where there are clusters of nerves and blood vessels. Stimulation by the needles awakens the body’s own healing power, releasing endorphins, the body’s natural pain-relievers and an antinflammatory steriod, cortisal.

Used during and after surgery, acupuncture reduces the amount necessary of anesthesia and pain medicines. The risk of adverse reactions to meds is greatly reduced.

There may be instances where acupuncture is not effective. Nervous pets release adrenaline that counteracts acupuncture’s benefits. Some medicines can also decrease effectiveness. Using acupuncture for cancer patients has to be very precise or it can accelerate cancer growth.

While it’s sometimes difficult to get cats to relax (or any animal for that matter) for the treatment, acupuncture is an excellent alternative as cats can be extremely sensitive to some medicines. Some cats will freeze in position when frightened, making treatment easier.

There are a number of new forms of acupuncture being used successfully.

Electro-Acupuncture – a microcurrent of electricity is attached to the metal needle stimulating the body’s electrical flow.

Aqua-Puncture – drops of sterile fluid placed under the skin at the acupuncture points.

Discuss with your acupuncturist which technique works best for your pet’s state of health, behavior and condition.

The effects of acupuncture are cumulative, so a number of treatments are recommended, depending on the condition being treated.

When choosing an acupuncturist, it’s very important to make sure he/she is a veterinarian and certified to practice acupuncture and who’s training you trust and feel comfortable with.

What illnesses are preventable in dogs?

The major infectious diseases of dogs are Canine Distemper, Infectious Canine Hepatitis, Parvovirus, Leptospirosis and Parainfluenza – DHLP/P. Leptosprosis can affect humans. Bordetella or Kennel Cough is another that can be prevented. Intranasal vaccine is sprayed into the dog’s nose. These are all preventable diseases as there are vaccines available. Your vet will tell you […]

Progressive Retinal Atrophy (PRA) is a genetic disease which causes pets to lose their vision. The vision loss can occur over a period of a few months to years. The first sign of PRA is an inability to see in low light or at night. Pets are often uneasy about going outdoors at night. They […]

Do Our Pets Enjoy Being Our One and Onlys

From studies conducted and my own observations, the results are some pets enjoy being the only one and some enjoy the company of others. Usually, if socialized early with other animals, your pet will enjoy companionship. It can be difficult to train prey animals and predators to live together peacefully. But it can be done. […]