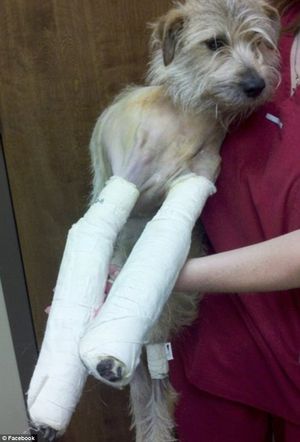 We’ve all been following the news of the terrible weather hitting the country – tornadoes, floods, violent storms. Our hearts go out to all those who have experienced terrible losses. We hope this story of a miracle dog lifts your spirits and gives you faith in the future.

It happened in Alabama. On April 27th, a terrier mix named Mason was blown away from the garage where he took shelter from the twisters. His family lost their home to the storm but were determined to search for Mason. Their efforts were fruitless. Two and a half weeks later, returning to the ruins of their home, they found a miracle – Mason was waiting for them at the house. He had crawled home in spite of suffering 2 broken legs.

The Birmingham Jefferson County Animal Control Shelter is taking care of Mason until his family can sort out their lives.

Mason underwent surgery May 20th and metal plates were put in place until his legs heal. Recovery will take about 6 weeks and Mason is expected to regain full normal use of his legs.

ASPCA – April is Prevention of Cruelty to Animals Month

News from the ASPCA: April is celebrated as Prevention of Cruelty to Animals Month. It’s a perfect time to adopt a pet from a shelter. Until all shelters become No Kill, pets are at risk for euthanasia. Your best friend is waiting at a shelter. If you see anyone abusing an animal, please report it […]

The 2nd annual National Family Pack Walk will be held in Washington, D.C. at the National Mall on September 29, 2012. The event will be led by “Scooby Doo” and Cesar Millan. After the walk, attendees will join in an afternoon of education, fun and mystery. Scooby Doo, North Shore Animal League’s Mutt-i-Grees are presenting […]