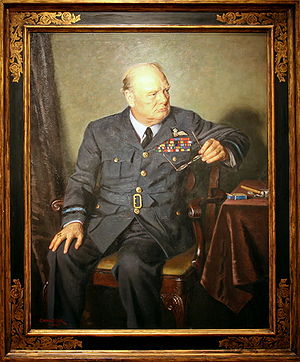 Sir Winston Churchill was a British politician and statesman who served as Prime Minister of the United Kingdom during World War II. Churchill was also an animal lover.

Churchill’s private secretary, Sir John Colville, gave him a cat named “Jock.” Before he died he asked that his home, Chartwell Manor, always keep an orange cat named Jock in honor of that first cat. The National Trust, which currently runs the manor, does keep a cat named Jock on the premises, although he is banned from the main rooms for fear he will damage the furniture.

Churchill owned numerous other cats, including a stray which was found on the steps of 10 Downing Street. He also had a cat named Nelson, named for Lord Nelson, who sat in a chair next to Churchill in both the Cabinet and dining rooms.

Churchill also owned a black poodle named Rufus. When he died, he was replaced with Rufus II. He treated his dogs like members of the family. It has been recorded that:

The Poodle ate in the dining room with the rest of the [Churchill] family. A cloth was laid for him on the Persian carpet beside the head of the household, and no one else ate until the butler had served Rufus’s meal.

One evening at Chequers the film was Oliver Twist. Rufus, as usual, had the best seat in the house, on his master’s lap. At the point when Bill Sikes was about to drown his dog to put the police off his track, Churchill covered Rufus’s eyes with his hand. He said, ‘Don’t look now, dear. I’ll tell you about it afterwards.’

According to some, two years before World War II, Churchill adopted a blue macaw. The bird, named Charlie, was taught to scream obscenities aimed at Hitler and the Nazis. Churchill’s family, however, deny that he ever owned a parrot.

Quotes by Churchill about animals:

The Patsy Award was created by the American Humane Association (AHA). Patsy is an acronym for Picture Animal Top Star of the Year. In 1958, in order to include television animal performers, the Performing Animal Television Star of the Year was added. The AHA created the Patsy after a tragic accident occurred during the filming […]

The Rainbow Bridge poem, written in prose form, has become a very popular concept, of a place of pets healed, green fields welcoming them, while they await the arrival of their humans. It has been a comfort to many people around the world, grieving the loss of a beloved pet. The story is believed to […]