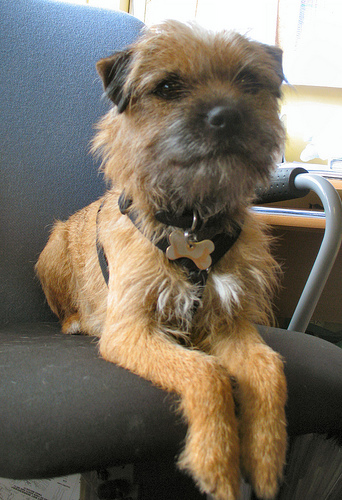 Canine cancer statistics in the U.S. are frightening. Estimates are that several million dogs will be diagnosed with cancer annually and one out of every 3 dogs will die of the disease. In dogs over 2 years old, cancer is the No. One Killer.

The good news is that research continues and there are new drugs and treatments on the market.

The Cleveland Clinic Foundation has seen promising results with a new drug, NO-Cbl, (nitrosyliaobalamin). Contact is Joseph A. Bauer, PhD., lead researcher at the Bauer Research Foundation in Akron Ohio. The Foundation is offering to treat dogs that otherwise have no hope. So far there have been no negative results.

News from Dr. Demian Dressler – Vitamin C can be used to aid in the fight against canine cancer. Oral Vitamin C has too low a concentration in the blood to be effective. The doses needed can be administered by IV injection. However Vitamin C should ot be given during chemotherapy and radiation as it may reduce the effectiveness of these treatments. Dogs that suffer from calcium oxalate urinary stones also should not have Vitamin C. Otherwise adding IV Vitamin C to the dog’s treatment should be considered.

The Role of Vitamin C in Preventing and Dissolving Kidney Stones:
The very common calcium phosphate stone can only exist in a urinary tract that is not acidic. Ascorbic acid (vitamin C’s most common form) acidifies the urine, thereby dissolving phosphate stones and preventing their formation. Vitamin C does not increase oxalate stone formation. Drs. Emanuel Cheraskin, Marshall Ringsdorf, Jr. and Emily Sisley explain in The Vitamin C Connection (1983) that acidic urine or slightly acidic urine reduces the UNION of calcium and oxalate, reducing the possibility of stones. “Vitamin C in the urine tends to bind calcium and decrease its free form. This means less chance of calcium’s separating out as calcium oxalate (stones).” (page 213) Also, the diuretic effect of vitamin C reduces the static conditions necessary for stone formation in general.

AB Science is an emerging biotechnical company in France headed by CEO Alain Moussy. Approval for its drug, Masitinib for treatment of grade 2 0r 3 mast cell tumors in dogs was granted in 2008 and is used in Europe. Clinical trials have shown that Masivet (trade name) has increased survival time of dogs with MCT. AB Science has opened a branch in the United States. The drug is awaiting approval by the FDA. Tyrosine (an amino acid) Kinase (enzyme) inhibitors like Masivet are safer and more effective than currently used drugs. About 25% of skin tumors in dogs and cats are MCTs. The trade name in the U.S. is Kinaset.

In Richmond, British Colombia, a company named BioCurex Inc. has developed a blood test to be used to detect cancer in dogs. Called OncoPet, it is a version of their human cancer detection blood test. In testing on dogs, OncoPet was 85% accurate. It can also be used for cats. As of June 2009 BioCurex expects the blood test to be available within months to distribute to vets. They have signed licensing agreements with Abbott Laboratories and Inverness Medical Innovations.

There are conflicting opinions about the use of Resveratrol for cancer in dogs. Dr. Demian Dressler, noted canine cancer specialist, feels that not enough trials have been conducted to prove resveratrol’s anti-cancer effects.

However, a study in mice given the drug orally showed it to be effective against colon cancer. Dr. Dressler also states that there are publications where when injected into laboratory aimals, resveratrol was beneficial. Injectables may not be available to vets at this time.

Caring for a dog is an extremely fulfilling experience but also a responsibility. Dogs need to be groomed, bathed and of course loved. Dogs with special needs are a challenge and puppies require extra care until they get older. Dog care articles: About Doggie Daycare Are Dewclaws Useful? Bathing a Large Dog Calming Your Dog’s […]

Ever wonder why your dog does the things he does? Scientists have only recently begun studying dog behavior seriously. Dog owners all know that their dogs are intelligent and can understand them pretty well. Researchers are studying how much of the anecdotal stories can be proven scientifically and whether dogs’ behavior has been modified as […]

Spitz-type dogs are a type characterized by long, thick, and often white fur, and pointed ears and muzzles. Their tail is usually curled over the dog’s back. Although it is not clear where they originate from, most of the Spitz-types seen today are from the Arctic. Through selective breeding, Spitz types have been developed to […]