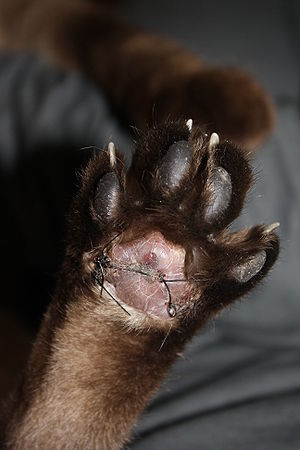 It is believed to be an auto-immune disease. Some studies have linked Pododermatitus to the Feline Immunodeficiency Virus (FIV).

A biopsy is required to confirm the disease.

The foot pad appears mushy and balloons out, sometimes has a purplish tint. Usually more than one foot pad is affected. It can affect cats of any age, gender or breed.

Pododermatitus is not usually painful, but if lameness occurs, it is treated with high doses of prednisone. Newer treatment with the antibiotic, Doxycycline, has shown some success. If the pad is ulcerated or sores develop, they may have to be removed surgically.

Clinically : soft, nonpainful swelling of one or multiple footpads, which in some cases become ulcerated and causing lameness. In some cats concurrent plasmacytic stomatitis, renal amyloidosis or immune-mediated glomerulonephritis is reported.

How Do Dogs and Cats Sweat

Vegan diets for humans are becoming more and more popular throughout the world. But how healthy is a vegan diet for cats? People who make a choice to be vegan can regulate their diets to include all the necessary nutrients. Our pet cats don’t have that choice. And cats, as obligate carnivores need meat and […]

Dogs and Cats Allergic to Humans

Dogs and cats can have the same or similar allergies as humans. They can be allergic to insect bites (I have one of those), molds, dust, pollen, food and so on. It isn’t only the flu we share – just as we can be allergic to pets, they can develop allergies to us. We humans […]