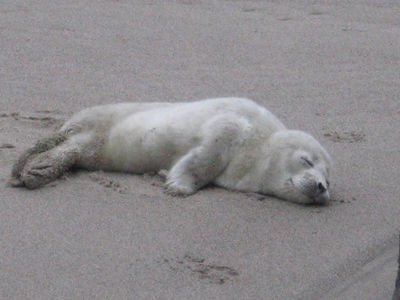 On Hay Island, Nova Scotia, February 22, 2011, the Canadian baby seal hunt began. The baby seal hunt is one of the most horrible and inhumane acts perpetrated by man.

While it is illegal in Canada to hunt newborn harp seals and hooded seals, they are allowed to be slaughtered when they reach the age of 12-14 days. At this age, seal pups haven’t learned to swim and still depend on their mothers’ care.

Seal hunting has at least a 4,000 year old history in Canada. The meat provided protein, fat and vitamins, while the fur and skins were used for warmth and waterproofing.

However, these days, there are many other choices for food and warmth that don’t involve the murder of animals.

In 2010, the Canadian government announced the quota for killing seal pups was 388,200. Ice conditions and campaigns against seal hunting resulted in keeping sealers from reaching the quota.

The methods used to kill the seal pups are clubbing them to death, shooting them or hooking them with a tool called a hakapik. Often the pups are skinned still alive even after their terrible beatings. The killing fields are covered with thousands of carcasses of dead seal pups.

Rules and regulations such as checking to make sure the seals are dead are ignored. The Canadian Department of Fisheries and Oceans (DFO) which regulates the seal slaughter rarely charges perpetrators.

Generally, sealers don’t even have the excuse that they depend on sealing to make a living. Employment is limited as the killing season last a few weeks each year. The average pay is $2,700, often $1,000 or less.

“Chefs for Seals” is an annual event taking place in Beverly Hills, CA. Celebrity chefs and celebrities gather to educate the public and help end the seal slaughter in Canada. Member chefs have chosen not to use any Canadian seafood.

In 2009, the European Union banned its trade in products of commercial seal slaughterers, closing a primary market for the Canadian sealing industry.

There are a number of organizations working to end the slaughter and asking people to boycott all Canadian seafood. Please check online and join in the fight to end the cruel and inhuman practice of seal slaughter in Canada and around the world.

The issue of animal testing is an important one for animal rights activists and pet lovers. What is the issue and what can you do about it? Product testing About 10% of all animals used for scientific purposes are used for product testing. Drugs, cosmetics, pesticides, food additives, and other products that might be hazardous […]