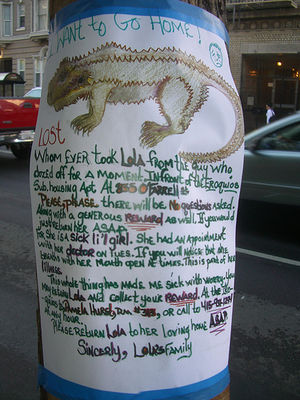 There are times when your pet has gone missing and you’ve exhausted the many means of finding her/him. You can enlist the aid of many organizations on the Internet who cover a wide area and may be able to help you. A word of caution – check with the Better Business Bureau, local shelters and your veterinarian to make sure whoever you choose to do the search is legitimate. Some searches are free and others charge a fee. Ask questions before giving out your information.

The ASPCA, the HSUS and animal lovers everywhere are asked to join the Georgia Humane Lobby Day, held in Atlanta on February 28th, 2012. This is a day you can make your voice heard in support of the animals you care about. The ASPCA will organize meetings with elected officials as well as prepare you […]

December 20, 2010 Wayne Pacelle, President and CEO of the HSUS (the Humane Society of the United States) tells us the President has signed the Truth in Fur Labeling Act this week. After investigation by the HSUS, it was revealed that major retailers and manufacturers were selling fur-trimmed garments that were unlabeled, incorrectly described as […]